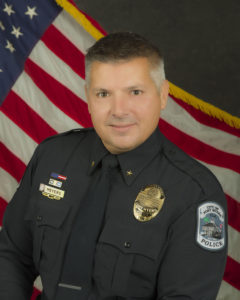 (Fort Myers, FL) FMPD welcomes a new Deputy Chief, Jeffery Meyers, to the ranks of the department. Meyers was sworn in at a City Hall ceremony today by City Clerk Mary Hagemann. He joins the department with 27 years of law enforcement experience, 24 of those years with the South Euclid, Ohio, Police Department where he started as a patrol officer and rose to the rank of Lieutenant. He is a Graduate of the FBI National Academy and Northwestern University School of Police Staff and Command and holds a BS degree in Criminal Law, Bowling Green State University. Deputy Chief Meyers comes from a long line of family involvement in law enforcement, his parents live in Estero and he has been visiting Fort Myers for many years. He takes on an administrative role with the FMPD overseeing support services and the development of improved tools and training for the officers and staff of the FMPD. Deputy Chief Meyers will work alongside Deputy Chief Randall Pepitone and Chief of Police Derrick Diggs overseeing the officers and civilian staff of the department.