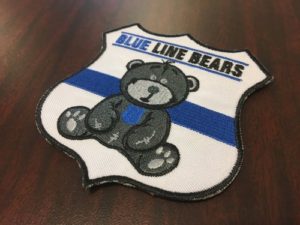 As a loving daughter, Megan O’Grady always naturally worried about her father, Cape Coral Police Sergeant Patrick O’Grady, as he went out on the streets to keep Cape Coral safe. In the wake of the murder of 5 Dallas police officers on July 7th of 2016, Megan’s worries, fears and emotions drove her to reach out and provide comfort to the families of officers killed in the line of duty.

Megan started Blue Line Bears, a nonprofit organization fashioning teddy bears out of the uniforms of fallen officers. Each one is created personally by Megan from the uniform shirt cloth, buttons, and patches and is delivered to the officer’s family along with a personal letter.

“After the attack of Dallas last year, after the five officers passed away, I got scared….and it just developed into me wanting to change what was happening”, Megan remarked about the founding of Blue Line Bears. She displayed a bear that will soon be delivered to the family of Officer Nicholas Rodman of the Louisville (KY) Metro Police Department, killed in the line of duty on March 29, 2017. Megan paused briefly to recall the fallen officer’s name, saying “There’s a lot of them….” When asked by Chief Newlan how many bears Megan has made since the founding of Blue Line Bears in January of 2017, she answered, “Including the ones we’re working on now, one hundred and thirty-six.”

The Cape Coral Police Department is enormously proud of Megan’s commitment to easing the pain felt by the families of fallen officers. Please watch the interview with this amazing young lady below as well as the video segment from the Today Show on Blue Line Bears, and visit Blue Line Bears at their website BlueLineBears.org and on Facebook here.