On February 3, 2016, the Bayshore Fire & Rescue, along with Lee County EMS, were dispatched to a motor vehicle accident on I-75 southbound. On route they learned that the vehicle was submerged in a retention pond and the driver was trapped. The engine crew dropped off personnel to begin the rescue while the engine had to proceed forward to the turnaround north of the Slater Road overpass.

Officer Cassie McHale was traveling southbound on I-75 in her personal vehicle and witnessed the firefighters and an FHP trooper attempting to access the driver in the submerged vehicle. Officer McHale stopped and without hesitation and despite being eight months pregnant, entered the water and assisted the rescue team in removing the driver who was now in cardiac arrest.

Officer McHale assisted in pulling the patient to the shore and establishing CPR and advanced life support care. She not only represented her profession with bravery and without concern to her personal safety, but she also represented the Fort Myers Police Department with the highest level of service.

The patient was resuscitated in the medic unit and regained a stable heart rate and blood pressure. Officer McHale’s actions greatly contributed to giving this victim a fighting chance. 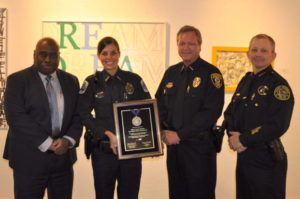 Her commander, Lieutenant Roger Valdivia, wrote, “Officer McHale is always enthusiastic, showing sincere interest and eagerness while performing her job. She consistently exhibits a positive attitude to others and strives to set the standard for others to follow. She maintains the highest standards in her work, conduct, appearance, and attitude. I admire her willingness, energy, and organizational abilities as she maintains an outstanding level of commitment as an officer of the Fort Myers Police Department.”

On behalf of the Florida Police Chiefs Association, we present this Lifesaving Award to Officer Cassie McHale for saving this driver’s life.

Thank you, Officer McHale, for your heroic efforts!