September 13, 2016)-  The Cape Coral Police Department as a new Deputy Chief of Police.

Lisa Barnes, a 24 year veteran of the Cape Coral Police Department, was promoted to the position of Deputy Chief of Police yesterday by Chief Dave Newlan. 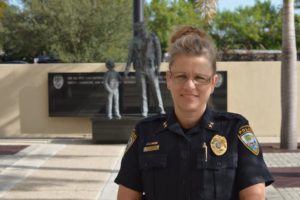 Barnes, who had previously served as the Captain overseeing the Investigative Services Bureau, had been serving as Acting Deputy Chief Of Police since the end of May.

“I am pleased to report that I have appointed Lisa Barnes to the position of Deputy Chief effective Monday, September 12, 2016.  Lisahas proven herself to be a highly respected leader in the police department and community over the past 24 years.  She brings a high degree of professionalism and balance to our organization, and will play a significant role in moving our department and city forward,” said Chief Dave Newlan.

“I look forward to working with our leadership team to help guide the Cape Coral Police Department into the 21st century.  The Law Enforcement profession is facing many challenges these days and I want the men and women of the Cape Coral Police Department and the citizens we serve to know that we are ready to face them together, in partnership with our community,” said Deputy Chief Lisa Barnes.

Deputy Chief Lisa Barnes has been with the Police Department since 1991. Prior to her selection as Deputy Chief, she was the Investigative Services Bureau Commander overseeing Property Crimes, Major Crimes Unit (Persons), Street Crimes Unit, Vice, Intelligence, and Narcotics Unit (VIN), Special Investigations Unit, Crime Analysis Unit, and Forensics.  She holds a Bachelor’s degree from Barry University in Professional Administration as well as a Master’s Degree in Public Administration from Barry University.