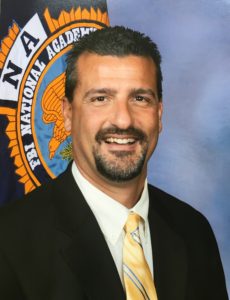 Along with Lieutenant Rodriguez, two hundred and twelve law enforcement officers graduated from this prestigious program. The 264th Session of the National Academy consisted of men and women form 47 states. Included in the class are members of law enforcement agencies from the District of Columbia, 21 international countries, four military organizations, and eight federal civilian organizations.

Known for its academic excellence, the National Academy Program, held at the FBI Academy, offers ten weeks of advanced communications, leadership, and fitness training for selected officers having proven records as professionals within their agencies. On average, these officers have 19 years of law enforcement experience and usually return to their agencies to serve in executive level positions.

FBI Director James Comey was the principal speaker at the ceremony. The graduating officers were represented by the class spokesperson, Donald F. Tuten, II, Chief, Jacksonville Sheriff’s Office, Jacksonville, Florida. A total of 49, 234 graduates now represent the alumni of the FBI National Academy since it began in 1935.

“I am proud of Lieutenant Rodriguez’s accomplishments and his dedication to furthering his education and his professional expertise.” Chief Dennis Eads.