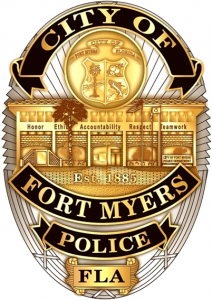 On Friday, October 9, 2015 the Fort Myers Police Department honored several employees at a monthly award ceremony. FMPD strives every day to not only protect and serve the residents of the City of Fort Myers, but to make it a better place to live.

K9 Officer William Schulte has been selected Officer of the Month for September 2015. K9 Officer Schulte was honored for his professionalism, dedication, and good observation skills that resulted with this career criminal being removed from the streets of Fort Myers.

On September 1, 2015, K9 Officer Schulte conducted a traffic stop on a black Chevy Impala in the area of 3221 Willin Street for illegal window tint. As the vehicle came to a stop, the single male occupant, Ruben Aspilaire, quickly exited and began to walk away. K9 Officer Schulte provided Aspilaire with repeated verbal commands to return to the vehicle and he refused to comply.

As K9 Officer Schulte walked past the open driver’s side door of the Impala, he observed a black box with a clear lid laying on the driver side front floorboard.  Inside the box, K9 Officer Schulte could clearly see that there was suspected cocaine and heroin.

The black box contained:  40.6 grams of cocaine, 3.9 grams of heroin, and .9 grams of marijuana.  A Springfield Armory 9mm semi-automatic handgun was located under the driver’s side seat and concealed from sight.

Officer Domonic Zammit was selected as the Rib City Officer of the Month for September 2015. Officer Zammit was honored for his quick response and immediate actions to an emergency situation which clearly played an important role in saving this person’s life.

On Monday, September 14, 2015, Officer Zammit responded to 2829 Cleveland Avenue in reference to an unresponsive male lying on the ground and not breathing.  The male was suffering from a heroin overdose.

Officer Zammit arrived on scene and began single person CPR on the unresponsive male.  After two cycles of CPR by Officer Zammit, the male started breathing. Shortly thereafter, EMS arrived on scene and administered Narcan, which offers immediate assistance by restoring breathing to anyone that has overdosed from the use of an opiate pain medicine such as OxyContin or Heroin.

Officer Walter Mickey was selected as the East Fort Myers Rotary Officer of the Month for September 2015. Officer Mickey was honored for his great observation skills and police work that resulted with a substantial amount of heroin being removed off the streets of Fort Myers.

Horton attempted to evade arrest by running back and forth between a nursing home to the east and the roadway.  After a short foot pursuit, Arthur Horton, was apprehended and found to be holding the following items in his hands:  three plastic baggies containing 6.1 grams of heroin; one plastic baggie with twelve smaller baggies of heroin weighing approximately 1.2 grams; and nineteen tables of Dilaudid.

Near Horton, an additional baggie of heroin was located weighing .2 grams along with a capped syringe. Upon apprehension, Horton admitted that all the narcotics were his and that there was no more in the vehicle.  Horton was arrested and charged with Trafficking Heroin, Possession of a Controlled Substance with intent to Distribute, and Possession of Drug Paraphernalia.

Marsha Martini and Gretchen Eberhardt were selected as the Civilians of the Month for September 2015.  The civilians were nominated for their quick actions and teamwork.

Upon making contact with the female, officers observed that she was very upset and appeared to be under a lot of stress.  She stated she couldn’t take care of her children anymore.  Officers brought the female back into the police department for assessment and assistance. Based on the statements from the female regarding issues in her life and her lack of assistance, Officers decided to Baker Act the female and she was turned her over to SalusCare.  Department of Children and Families (DCF) was contacted regarding the children.