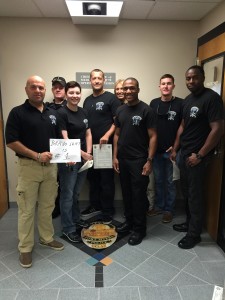 On Friday, September 11, 2015 the Fort Myers Police Department honored several employees at a monthly award ceremony. FMPD strives every day to not only protect and serve the residents of the City of Fort Myers, but to make it a better place to live.

Sergeant Ramy Moussa, Officer Brock Ferguson, Officer Ralph Louissaint, Officer Robert Vega, Officer Gary Farrington, Officer Cierra Carter and Officer Christian Reynolds have been selected Officers of the Month for August 2015. The Officers were honored for their quick actions on an armed robbery call that resulted with three dangerous criminals being removed from our city streets.

On August 14, 2015 officers responded to a robbery in-progress at the 7-Eleven located at 2980 Colonial Boulevard. The caller advised two men, wearing bandannas covering their faces, entered the business with firearms and demanded money.

Officer Ferguson quickly arrived on scene and located the getaway vehicle in the parking lot, which was a four-door green Lincoln Continental. Officer Ferguson and Officer Vega approached the vehicle which began to flee out of the parking lot and onto Colonial Boulevard at a high rate of speed.  Officer Vega and Officer Ferguson pursued the vehicle, while Sergeant Moussa called out the direction of travel. Several officers, including Officer Louissaint, Officer Farrington, Officer Carter, and Officer Reynolds attempted to anticipate the getaway driver’s direction of travel during the pursuit.

Officer Louissaint and Officer Reynolds deployed stop-sticks, which punctured all four tires stopping the vehicle at the intersection of Ford Street and Lafayette Street.  All three occupants inside the vehicle were immediately detained and later arrested and charged accordingly. 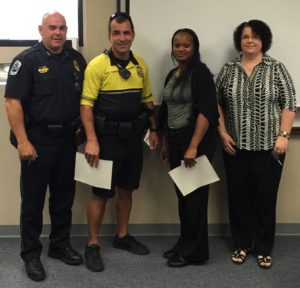 Detective Myra King and Officer Alain Gagnon were selected as the Rib City Officers of the Month for August 2015. The officers were honored for their actions, professionalism, and teamwork that led to the arrest of a criminal that was targeting the downtown area of Fort Myers.

Cape Coral Police Department advised Officer Gagnon that the owner of the vehicle is working in the downtown area and the vehicle was supposed to be parked in the nearby parking garage.  Based upon this information, Officer Gagnon immediately detained the driver who was identified as Michael Gregory.  Officer Gagnon then requested the assistance of Detective King.

Detective King responded and met with Gregory. Detective King utilized her training and knowledge of the various prior burglaries occurring in the downtown area and was able to obtain a Post-Miranda confession of two burglaries that were committed by Gregory. Due to Officer Gagnon’s keen observations and attention to detail, he was able to apprehend a young and developing car thief before the victim even realized the crime had been committed. 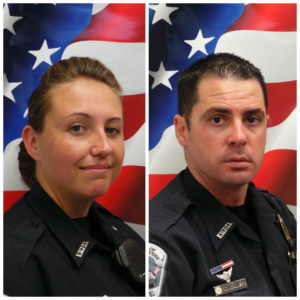 Officer Amberlee Williams and Officer Gustavo Goncalves were selected as the East Fort Myers Rotary Officers of the Month for August 2015. The officers were honored for their initiative, teamwork, and sound police tactics. The dedication and professionalism of these two officers led to the identification and arrest of a homicide suspect.

On August 11, 2015 the Fort Myers Police Department received a BOLO (Be On the Look Out) from the Lee County Sheriff’s Office for a white Range Rover in the area of Ortiz Avenue and Dr. Martin Luther King Jr. Boulevard speeding and driving erratically. The vehicle was last seen heading north on Ortiz Avenue.

During their contact with Brian Hyde, it was determined that Hyde was out on an immigration bond, and he did not have a valid Florida license. Officer Goncalves also believed Hyde had been drinking and may be impaired.  After conducting Field Sobriety Exercises, Hyde was placed under arrest for driving without a valid driver’s license.

Officer Williams determined the vehicle was registered to and owned by a Dorla Pitts. Hyde stated the owner of the vehicle was aware he had possession. Officer Goncalves observed damage to the driver’s side of the vehicle, and believed the damage was from a recent accident.  Officer Goncalves requested that the Lee County Sheriff’s Office (LCSO) make contact with the registered owner, Dorla Pitts, at her residence in Lehigh Acres to confirm if Hyde had permission to drive the vehicle and whether the damage was from an older accident or had just occurred while Hyde was in control of the vehicle.

Lee County Sheriff’s Office immediately contacted FMPD dispatch and advised they were working a major scene involving the residence and that Hyde was a possible suspect in a homicide. LCSO responded to the location of the traffic stop and took custody of the vehicle as a crime scene.  Officer Williams transported Hyde to LCSO’s Major Crimes Unit for an interview. Hyde was later charged with four counts of Homicide. 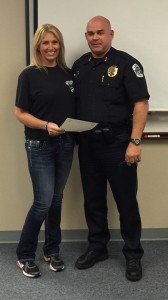 Telecommunications Operator II Amaris Langeland was selected as the Civilian of the Month for August 2015. TCOII Langeland was nominated for her professionalism and dedication displayed on two separate incidents involving vehicle pursuits.

On August 14, 2015, officers were involved in a vehicle pursuit of two armed robbery suspects from a 7-Eleven. TC0II Amaris Langeland was working the main radio channel at the time of the incident.  Sergeant Moussa was the pursuit supervisor and gave TC0II Langeland several tasks to accomplish during the pursuit. This particular pursuit was 10.5 miles long and lasted 13 minutes.  TC0II Langeland captured every turn by turn and direction precisely and accurately, including pertinent details given out over the radio by several units. TC0II Langeland displayed excellent radio discipline, did not tie up the channel, and only transmitted when needed. TC0II Langeland remained poised, calm, and professional throughout the pursuit.

On August 23, 2015, TC0II Langeland dispatched officers to a suspicious person at 4682 Siesta Circle. The complainant advised that a white male was walking down the street looking into vehicles in the neighborhood. The complainant later flagged down the officers and described the suspect along with his vehicle. The officers were able to locate the suspect vehicle, which fled from the officers during an attempted traffic stop. TC0II Langeland ensured the channel was 10-3 (stop transmitting) allowing the officers the ability to openly transmit to one another the direction of travel of the suspect vehicle, which was also stolen through Osceola County Sheriff’s Office. The pursuit lasted a short time, but the amount of detailed notes describing the speed, direction of travel, and location of the officers was truly impressive. 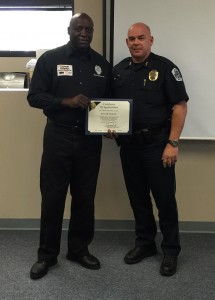 Mr. David Lynom of Lynom Investigation & Executive Security was selected as the Citizen of the Month for August 2015. Lynom was honored for his assistance in identifying and apprehending an armed robbery suspect. It is clear, especially under the circumstances, that he put the victim’s safety and the safety of the community first. Without his involvement, the suspect may have not been identified and apprehended without incident and valuable evidence linking him to the crime may never have been recovered. Additionally, Lynom has also assisted the Fort Myers Police Department with numerous incidents; which has significantly reduced crime at the Jones Walker Apartment Complex, located at 2909 Blount Street.