On Friday, August 14, 2015 the Fort Myers Police Department honored several employees at a monthly award ceremony. FMPD strives every day to not only protect and serve the residents of the City of Fort Myers, but to make it a better place to live.

A Special Investigations Group Narcotics Detective has been selected Officer of the Month for July 2015. The Detective was honored being the lead investigator for the agency’s most recent drug roundup. His investigation led to sale charges against twenty-seven suspected drug dealers operating throughout the City of Fort Myers. The vast majority of these investigations occurred near schools, churches, and public parks.

This Detective was also the lead investigator for another drug roundup which occurred in the spring of 2015 which led to the arrest of ten suspected drug dealers. In total, the Detective’s investigations led to sale charges against 37 drug dealers and a combined sixty-eight sale charges. Thus far, thirty two have been located and are awaiting trial. 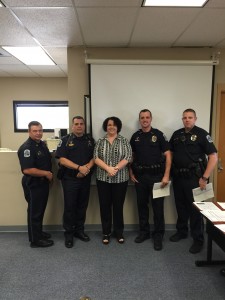 Officer Jari Sanders and Officer Matthew Yeomans were selected as the Rib City Officers of the Month for July 2015. Officers were honored for their proactive patrols in the North District as part of a robbery suppression operation.

During the operation, officers observed three males walking on Marsh Avenue, approaching DeSoto Avenue. Officer Sanders recognized one of the males as from prior contacts as the department’s Juvenile Assess and Monitor (JAM) officer. This youth was in violation of his probation for being outside after his court ordered curfew hours. Officer Sanders pulled the patrol vehicle over alongside of the youth and activated his emergency equipment. Officer Yeomans exited the driver side of the vehicle and advised the youth to stay on the sidewalk. The youth saw the officers and immediately took flight from them.

After a short pursuit, the officers were able to take the youth into custody without incident. Officers located a semi-automatic hand gun lying on the grass next to where the youth had fallen. The firearm was a .380 Ruger handgun and had one bullet in the chamber, and two rounds inside the magazine. The youth was arrested and charged with violation of probation, resisting arrest, possession of a firearm by a convicted felon, and carrying a concealed weapon.

Officer Michael Preshard and Officer Ryan Lakatos were selected as 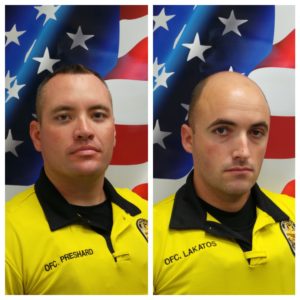 the East Fort Myers Rotary Officers of the Month for July 2015. The officers were honored for their outstanding performance which led to a lifesaving incident.

On July 6, 2015, Officer Preshard and Officer Lakatos responded to 2266 Altamont Avenue in reference to a 40-year-old male who had overdosed. The officers quickly arrived on scene, located the male who was lying on his back, unresponsive, and not breathing.

Officer Preshard and Officer Lakatos immediately jumped into action and began to administer CPR. Officer Preshard gave chest compressions as Officer Lakatos attempted to locate a pulse. Officer Preshard continued chest compressions for approximately three minutes when he observed the male begin to breathe and a faint pulse was found. EMS arrived moments later. The victim was transported to Lee Memorial Hospital for further treatment where he admitted to EMS personnel that he ingested alcohol, cocaine, and heroin before he lost consciousness.