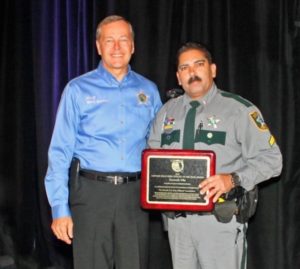 The best law enforcement officer in the nation at helping kids make correct choices about drugs, alcohol and other aspects of their lives works at the Collier County Sheriff’s Office. CCSO Cpl. Ken Vila was named the 2015 D.A.R.E. Officer of the Year. The national award, given to someone who has shown dedication to D.A.R.E. beyond the