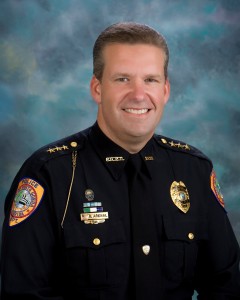 Chief of Police Albert A. (Butch) Arenal is a lifelong resident of Charlotte County who joined the Punta Gorda Police Department in 1986, and was appointed Chief of Police in December of 2008. In his 27 year career with the department, he supervised all facets of the agency, and he served as the agency’s Accreditation Manager, coordinating the department’s effort to achieve its first State law enforcement accreditation award in 1998.

Chief Arenal holds an Associate in Arts degree from Edison College and a Bachelor of Science degree in Management from International College (now Hodges University) where he was graduated with honors. Chief Arenal is a 1998 graduate of the 193rd Session of the FBI National Academy and a graduate of the Florida Department of Law Enforcement’s 41st Chief Executive Seminar. He currently serves as Vice-Chair of the Criminal Justice Standards and Training Region 10 Training Council and Chair of the Florida Criminal Justice Executive Institute Policy Board. He served three consecutive terms (2010-2012) as President of the Southwest Florida Police Chiefs Association where he currently serves as Immediate Past President. Chief Arenal has also been an active member of the Florida Police Chiefs Association since 2006.

Chief Arenal and his wife Barbara live in Punta Gorda, and have an 8-year-old son, Connor.