On Friday, May 1, 2015 several officers from the Fort Myers Police Department were honored by Southwest Florida Mothers Against Drunk Driving for various accomplishments in the fight to eliminate drinking and driving. MADD’s Program Specialist Lori Burke presented the officers with a certificate and challenge coin as part of their Law Enforcement and Community Recognition Program. 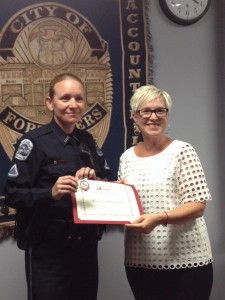 Officer Lesa Breneman of the FMPD’s traffic unit was honored for her outstanding dedication to driving under the influence enforcement. Officer Breneman is the only Drug Recognition Expert at FMPD and made 59 DUI arrests in 2014 while conducting 11 DRE evaluations. Officer Breneman is a traffic homicide investigator and works tirelessly towards the prosecution of DUI manslaughter and serious injury cases. Officer Breneman has a 100% conviction rate on death cases involving impairment. Additionally Officer Breneman serves as the agency’s lead DUI instructor who certified 15 officers in DUI enforcement and detection in 2014. 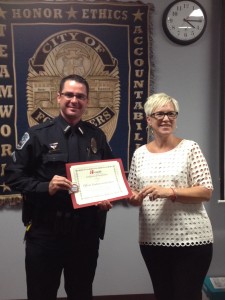