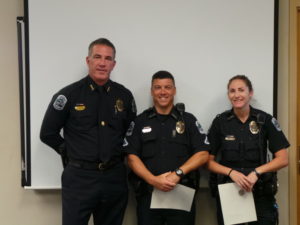 On Friday, April 10, 2015 the Fort Myers Police Department honored several employees at a monthly award ceremony. FMPD strives every day to not only protect and serve the residents of the City of Fort Myers, but to make it a better place to live. “It is our policy to recognize employees of exemplary performance of their duties” said Chief Doug Baker. “We appreciate their heroics and the hard work that these men and women put in each day.”

Detective John Price, Officer David Conticelli and Officer Kelsey Evenson have been selected Officers of the Month for March 2015. The officers were honored for their diligence and problem solving abilities during a burglary investigation.

In the beginning of February 2015, the Fort Myers Police Department’s West District began experiencing an influx of vehicle and residential burglaries. Many residents in these neighborhoods were leaving doors unsecure and valuables in plain view; making this a perfect opportunity for the criminal element to take advantage of these homeowners.

Assigned to this District are Community Policing Officers Conticelli and Evenson. These two officers are responsible for quality of life issues and crime trends within their designated area of operations. Immediately, these officers researched this problem and developed courses of action to identify and apprehend these individuals that were compromising the community’s safety. Both Officer Conticelli and Officer Evenson took this problem personal and began to work long hours both on and off duty to resolve the situation.

These officers began networking with various elements of the Department to include the Detective Division, JAM, COPE, other Community Policing Officers, and the Patrol Division. Detective John Price was also a key player during the investigation. In addition, these officers communicated with each other and sections of the Lee County Sheriff’s Office (LCSO) since their jurisdiction borders the West District. These officers also corresponded with State Probation Office and Department of Juvenile Justice.

Amazingly over the course of a couple weeks, these officers began to identify numerous suspects of various groups that worked independently concerning this burglary trend. The majority of these criminal groups were using the same modus operandi to commit these criminal actions; searching for unsecured vehicles and dwellings and taking valuable property that was left unattended.

Officer Conticelli and Officer Evenson began to spearhead various operations to target these criminals and involved numerous officers and resources to accomplish the task. Detective Price continued to follow up on the investigation and numerous leads.

Operations were set up during the month of February and into March which led to the arrest of eight individuals for a wide variety of offenses to include grand theft, drug charges, vehicle burglary and residential burglary. Officers followed up with Probation Officers to ensure violations of probation would occur in a timely manner thus keeping them off the city streets unable to further victimize our residents.

These officers set the example for their peers to follow and are a great asset to the Fort Myers Police Department. They are truly a role model for their peers and an example of true law enforcement professionals.

Two Special Investigation Group Narcotics Detectives were selected as the Rib City Officers of the Month for March 2015. The Detectives were honored for their work on a long term investigation that led to the arrest and convictions of five subjects on federal drug charges.

The operation resulted in the seizure of 33 grams of cocaine base, 657 grams of cocaine hcl, 45 grams of heroin, and 7 rifles. The street value of the seized drugs was estimated at over $37,000. This is a small portion of the total worth of this organization, estimated at one million dollars a year in illicit sales. The suspects in this case are potentially receiving prison sentences ranging from 7 to 40 years in Federal Prison.

These detectives are commended for their expertise and professionalism during this operation. As a result of their efforts, violent drug dealers were removed from the streets of Fort Myers. Their superior work ethics are an example for others to follow.

Officer Megan Pate and Officer Jari Sanders were selected as the East Fort Myers Rotary Officers of the Month for March 2015. The officers were honored for distinguishing themselves during their participation in the “2015 Josh Hargis Ranger Ruck.” The event was a 24-hour event that brought awareness and donations to military service veterans and their families.

The Josh Hargis Ranger Ruck is in honor of Corporal Josh Hargis who was severely wounded losing both legs from the knee down in Southern Afghanistan on October 6, 2013, along with other member of the 3rd Battalion of the 75th Ranger Regiment. Corporal Hargis was transported to a military hospital where millions bore witness to his “Salute Seen Around the World.”

During this year’s event, participants wore tactical gear that weighed up to sixty pounds and traversed the Edison Bridge back and forth numerous miles. These participants journeyed through heat, high humidity, rainstorms, and the fog of night. They suffered blisters, sore muscles, and fatigue; but only pressed on because this physical pain was nothing compared to what our disabled veterans deal with on a daily basis.

A total of three hundred and eighty miles were recorded during the time period of the event, and over four thousand dollars was donated to “Lead the Way Fund” a non-profit organization established to raise funds in support of disabled United States Army Rangers and the families of Rangers who have died, have been injured, or are currently serving in harm’s way around the world. The Lead the Way Fund provides spouses and children of deceased, disabled, or active duty Rangers with assistance for health/wellness programs and other financial services determined to be vital to the family’s well-being, beyond what the government and Veterans Affairs can offer.

Officer Pate and Officer Sanders both accomplished 30 miles each during the event. They truly displayed the mindset, heart, and drive of a Ranger Warrior. Both of them are commended for their distinguished perseverance while performing an outstanding task for a notable cause.