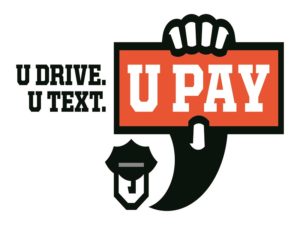 The Fort Myers Police Department will once again participate in the National Distracted Driving Enforcement Campaign which runs from April 10, through April 15, 2015. FMPD will step up patrols and operations in the month of April for the national push to bring awareness to distracted driving.

A Florida law that went into effect on October 1, 2013 prohibits operating an in-motion motor vehicle while manually typing e-mails, text messages, or instant messages into a wireless communication device. Law enforcement can now issue citations for this risky behavior.

Sending or receiving text messages takes a driver’s eyes from the roadway for an average of 4.6 seconds. Further research states a vehicle traveling 55 mph could travel the length of an entire football field in that time.

According to a 2014 special article in the New England Journal of Medicine, the risk of a crash or near-crash among novice drivers increased with the performance of many secondary tasks, including texting and dialing cell phones.

“The studies and statistics are out there. We just need to follow them,” said police spokesman Lieutenant Victor Medico.