On Friday, March 13, 2015 the Fort Myers Police Department honored several employees at a monthly award ceremony. FMPD strives every day to not only protect and serve the residents of the City of Fort Myers, but to make it a better place to live. “It is our policy to recognize employees of exemplary performance of their duties” said Chief Doug Baker. “We appreciate their heroics and the hard work that these men and women put in each day.” 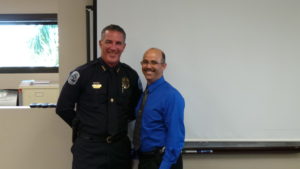 Detective Jesus Ramos has been selected Officer of the Month for February 2015. The detective was honored for his initiative, creativity, and perseverance to follow through with this task from start to finish.

Detective Ramos has been a member of the Hostage Negotiation Team (C.I.N.T) for several years. The Unit was in desperate need of a vehicle to utilize for call outs for many years; however, this was not possible due to budget restraints. Detective Ramos began researching and reaching out to outside companies in an attempt to have a vehicle donated.

Detective Ramos reached out to “Good Wheels” and was eventually successful with the donation of a mini bus. Additionally, he reached out to other companies to assist the department with donations for equipment and also paint for the bus to match the department’s paint scheme. Detective Ramos was instrumental in obtaining this vehicle for the Unit, which was a huge accomplishment and a much needed item for the Unit. The negotiators now have their own designated vehicle where equipment is stored and ready for call outs – without the worries of transporting equipment from the station or relying on the SWAT van or MCOPS; thus, reducing their response time. Detective Ramos spent countless hours of his own time away from his family without reimbursement for his hard work to ensure the unit obtained this fully functional bus, while also saving the City and the tax payers thousands of dollars.

Officer Yanny Morales has been selected as the Rib City Officer of the Month for February 2015. Officer Morales was honored for his continued dedication to the duty, profession, and concern for the safety and wellbeing of the Citizens of Fort Myers which truly encompasses and exemplifies the core values of the agency.

Officer Morales has been a member of the Fort Myers Police Department for approximately eight years, and he is currently assigned as a Community Policing Officer for the North District. His duties as a Community Policing Officer include attending neighborhood watch meetings, conducting area/neighborhood patrols and establishing professional relationships with community members and businesses in the district. In addition, Officer Morales is required to review crime trends, crime maps, and other resources available to him so he can recognize, address, coordinate, and implement appropriate responses to crime trends which occur in his area of responsibility.

Officer Morales continues to demonstrate exceptional results and success within the North District due to his interaction with the neighborhood associations and members of the community. He has formed valuable lines of communication with citizens in his assigned patrol area, which provides insight in relation to the crimes being committed by individuals and the areas that are ultimately affected.

Officer Morales’ knowledge base and dedication has proven a valuable asset to the North District and the City of Fort Myers. Officer Morales has developed numerous reliable sources through his community policing efforts, and as a result, was instrumental in the arrest of an escaped prisoner on January 24, 2015.

Officer Morales contacted the Special Investigations Group and the Violent Crimes Task Force to assist him with this matter. It was due to Officer Morales’ dedication to the area and the intelligence obtained, that escaped prisoner, Cristobal Martinez, was located and arrested.

Officer David Conticelli and Officer Kelsey Evenson were honored for demonstrating excellent policing and investigative skills while successfully removing a criminal from the streets of Fort Myers. They are role models for their peers and an example of true law enforcement professionals.

On February 1, 2015 at 5:00 p.m., the Fort Myers Police Department began investigating several past occurred burglaries to the storage units. As part of the investigation, the officers reviewed video surveillance that showed an unknown white male committing the offense.

Officer Conticelli and Officer Evenson (Community Policing Coordinators for this area) conducted a follow up investigation nearby at the Hilton House Apartments located at 3079 Cleveland Avenue. Through the course of their investigation, they were able to develop Domenic Matteo, a resident at the apartments, as a suspect.

Matteo was later positively identified as the same subject caught on video surveillance during the burglaries at Uncle Bob’s Self Storage. The Detective Bureau received a search warrant for Matteo’s apartment and found evidence linking Matteo to the crimes. Officers located Matteo and took him into custody without incident. Matteo was charged with burglary, grand theft, and criminal mischief. 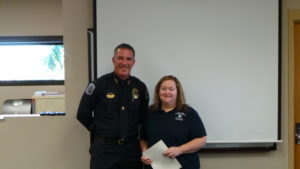 Telecommunications Operator Sheryl Louden was selected as the Civilian of the Month for February 2015. TCO2 Louden was nominated for going above and beyond what is required of her normal duties. Her dedication and commitment to the citizens of Fort Myers is recognized and appreciated.

Due to the absence of the Administrative Lieutenant, TC02 Louden took over the responsibility and management of the Communications Division. This transfer occurred on July 10, 2014, placing TC02 Louden in a major leadership role in which she is responsible for numerous employees as well as the daily management of a critical component of the agency.

Many supervisors have observed the extraordinary skills and characteristics that TC02 Louden displays on a daily basis. From accountability to performance to organization; she has created an atmosphere of excellence and commitment within her staff members. TC02 Louden has earned the respect and loyalty of the employees of the Communications Division. TC02 Louden is also a motivated and inspirational leader who inspires her workers by leading from the front and picking up slack when needed.

In addition, TC02 Louden effectively blends her management skills with her technical expertise. Day to day operations would come to a halt and officers would be exposed to additional hazards if it was not for the outstanding staff of the Communications Division, which is guided by the management principals of TC02 Louden. TC02 Louden is an asset to our agency and sets an example for others to follow.