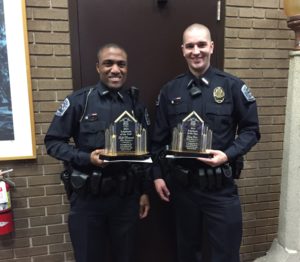 The Fort Myers Police Department is pleased to announce that Officer Ralph Louissaint and Officer Curtis Cates were selected as the City of Fort Myers 2014 Employees of the Year. The Officers were honored during the Tuesday, February 17, 2015 City Council meeting. The officers were selected by the Employee Recognition Review Committee for their for their quick response and lifesaving actions during a shooting investigation from April, 2014.

Officers Louissaint and Cates responded to a call where an individual had been shot near the intersection of Ford Street and Thomas Street. Officer Louissaint and Officer Cates were the first officers to arrive on scene, and upon arrival, the Officers observed a male pulling the victim from the canal that runs parallel to Ford Street on the east side of the roadway. The officers quickly assessed the victim who had been shot and was also not breathing. The officers immediately began lifesaving measures by conducting chest compressions and rescue breathing.

Had it not been for these Officers quickly reverting to their training and applying the lifesaving techniques they acquired through First Responders Lifesaving Training, the outcome for the victim would most likely be very different. “Officer Louissaint and Officer Cates are dedicated professionals who serve and protect our great City. We couldn’t be more proud of them,” said Operations Bureau Captain Jim Mulligan.