On Friday, February 13, 2015 the Fort Myers Police Department honored several employees at a monthly award ceremony. FMPD strives every day to not only protect and serve the residents of the City of Fort Myers, but to make it a better place to live. “It is our policy to recognize employees of exemplary performance of their duties” said Chief Doug Baker. “We appreciate their heroics and the hard work that these men and women put in each day.” 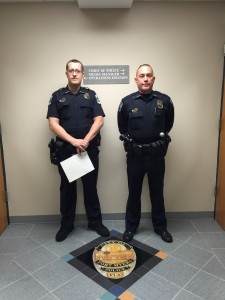 Officer Robert Vega and Officer David Dietz have been selected Officer of the Month for January 2015. The officers were honored for going above and beyond their normal duties by showing care and compassion for a family in need of assistance.

On Thursday, January 29, 2015, at 12:30 a.m., Officer Dietz located an occupied suspicious vehicle parked at the Trailhead Neighborhood Park located at 3980 Shoemaker Boulevard. The vehicle was occupied by a family of six (father, mother, and four children – ages 4, 6, 9, and 12). Officer Dietz’s investigation revealed that the family was homeless and living out of their vehicle. The Salvation Army was full and the temperature that night had dropped to 45 degrees, the family also did not want to run the heat in their vehicle in order to conserve fuel.

Officer Vega arrived as back up and both officers began searching for options to house the family for the night. After exhausting all means and calling several hotels and shelters with no results, both officers decided to spend their own money and split the cost of a hotel room so the family and children could stay out of the cold.

As a result, the family was able to stay at the Knights Inn for one night (courtesy of both officers) until they could relocate to a permanent shelter the following day. Neither officer expected compensation or a reward for their act of kindness but were content to know the family would be out of harm’s way, despite their own out of pocket expense. 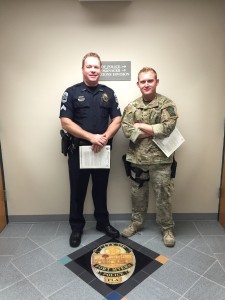 Officer Walter Mickey and Officer Sean Havenner have been selected as the Rib City Officers of the Month for January 2015. The officers were honored for their observations and perseverance which resulted in the removal of two violent criminals from the street of the City of Fort Myers.

On January 1, 2015 Violent Crimes Task Force Officers Mickey and Havenner were patrolling the area of Knight Street and Lemon Street when they observed a subject in the rear seat of a silver vehicle. This subject was driven to an address on Lemon Street where he and another male exited the car. Both men were acting suspiciously as they walked to the rear of the residence, and then returned to the front and sat down on some chairs by the carport.

The homeowners observed the men on their property and confronted them regarding their unwanted presence and identity. Due to the confrontation, Officer Mickey and Officer Havenner stopped at the location to investigate further. One subject continued to act suspiciously by walking backwards away from the officer while holding one hand concealed behind his back.

The officers also detected an odor of marijuana coming from both individuals and determined a pat down for weapons would be conducted. While one subject was being patted down, the other immediately took flight across the yard. Officer Havenner was able to take hold of the fleeing suspect by his shirt; however, this subject responded by striking Officer Havenner in the face several times which resulted with both men falling to the ground. While on the ground, the suspect continued his attempts to flee while resisting the officer’s efforts to arrest him. With the assistance of Officer Brandon Birch, they were able to take this fleeing suspect into custody without incident. Officers located a Taurus 9 mm handgun which had been concealed in a holster in the suspect’s waistband.

Both subjects were ultimately arrested and charged with loitering and prowling, and numerous drug related charges. The suspect who attempted to flee from officers was also charged with carrying a concealed firearm, resisting an officer with violence, and battery on a law enforcement officer.

Officer Bobby Kerbs and Officer Evelyn Roberts have been selected as the East Fort Myers Rotary Officers of the Month for January 2015. The officers were honored for their teamwork and investigative skills while working a case with our Federal counterparts in law enforcement.

FMPD officers skill set while in the field drew great praise by special agents who worked with the officers on a call in late January. Officer Kerbs and Officer Roberts were additionally acknowledged for their outstanding representation of the Fort Myers Police Department.