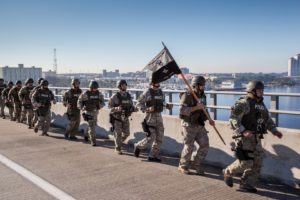 Beginning on March 1, 2015 at 12:00 p.m. members of local Special Weapons and Tactics teams (SWAT), namely Fort Myers Police Department, Lee County Sheriff’s Office and Cape Coral Police Department, will participate in the “2015 Josh Hargis Ranger Ruck.” This is a 24-hour event designed to bring awareness and donations to military service veterans. The members of our armed forces have made sacrifices for our freedom, and we must always remember their honorable deeds and accomplishments. SWAT Team Operators will wear full tactical gear as they traverse back and forth on the Edison Bridge.

Last year on January 28, 2014 active and retired members of the Fort Myers Police Department’s SWAT Team completed, “The Josh Hargis Ranger Run.” This was in honor of Corporal Josh Hargis who was severely wounded losing both legs from the knee down in Southern Afghanistan on October 6, 2013. Other members of the 3rd Battalion, 75th Ranger Regiment also suffered severe injuries. Hargis was transported to a military hospital where millions bore witness to Corporal Hargis’ “Salute Seen Around the World.” Members of the Hargis family walked 222-miles from Fort Stewart, Georgia to the National Infantry Museum at Fort Benning, Georgia during the month of February 2014 to raise awareness during “The Warrior’s Walk.”

During the 2014 event Corporal Hargis sent Lieutenant Jeff Bernice a tomahawk he carried in Afghanistan, and it was carried in each of the 222-miles here in Fort Myers. One SWAT Team member at a time traveled in 60 pounds of full tactical gear two miles (over the bridge and back) with tomahawk in hand before handing it off to the next runner. “As each member completed two miles, Josh’s tomahawk was used to strike a piece of wood that was provided to the wounded soldier as a token of gratitude for his sacrifices. Support and public awareness to the sacrifices of Corporal Hargis as well as all the men and women overseas is our ultimate goal,” said Lieutenant Bernice. Several active and retired members of local SWAT teams have served in the Ranger Regiment like Corporal Hargis or have been awarded the Ranger Tab.

With this year’s event, funds can be donated to “Lead the Way Fund” a 501c3 non-profit organization established to raise funds in support of disabled U.S. Army Rangers and the families of Rangers who have died, have been injured or are currently serving in harm’s way around the world. Army Ranger Lead the Way Fund provides spouses and children of deceased, disabled or active duty Rangers with assistance for health/wellness programs and other financial services determined to be vital to the family’s well-being, beyond what the government and Veterans Affairs can offer.

If you’re interested in donating on behalf of the local SWAT teams please use the following link:
http://www.firstgiving.com/team/286972