On Friday, January 9, 2015 the Fort Myers Police Department honored several employees at a monthly award ceremony. FMPD strives every day to not only protect and serve the residents of the City of Fort Myers, but to make it a better place to live. “It is our policy to recognize employees of exemplary performance of their duties” said Chief Doug Baker. “We appreciate their heroics and the hard work that these men and women put in each day.” 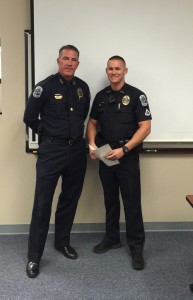 Officer Trevor Lehman has been selected Officer of the Month for December 2014. Officer Lehman was honored for going beyond his normal responsibilities while exhibiting leadership qualities that resulted in the apprehension of two violent felons, a firearm, and drugs.

On Tuesday, December 23, 2014, the Police Department received a call from a citizen who wished to provide information about a person wanted in connection with a shooting that occurred earlier in the month. The caller further advised that they were willing to assist with the capture of the suspect.

After careful consideration and planning, Officer Lehman arranged a plan that would keep the caller, the officers, and the suspect as safe as possible. Later that evening, with the assistance from the JAM, COPE, Housing, and K-9 Units, Officer Lehman was able to take the suspect into custody without incident during a traffic stop.

During the stop, officers became concerned about another male that was inside the vehicle. The passenger was seen making suspicious movements in the vehicle as if he was trying to hide something under the seat in front of him. Officers removed the passenger from the vehicle and recovered a loaded .45 caliber Taurus semi-automatic handgun underneath the seat. This passenger was also in possession of cocaine and marijuana at the time of the arrest. 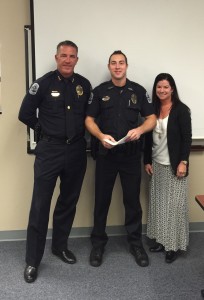 Officer Richard Carpenter has been selected as the Rib City Officer of the Month for December 2014. Officer Carpenter was honored for his awareness and sound police tactics that led to the removal of a firearm from the streets of Fort Myers.

Officer Carpenter using his tactical police training ordered the men to keep their hands raised while he did a protective pat-down. Neither of the males had a handgun on them. Once back up arrived, the males were detained pending further investigation.

Officer Carpenter previously noted that the two males were standing in front of a cigarette receptacle. The receptacle had a thin neck with a large rounded base that is designed to contain used cigarette filters. Officer Carpenter being concerned that the men may have hidden the weapon, returned to the receptacle, removed the tip and located a loaded Smith & Wesson 460 Magnum Revolver. Both men were questioned and denied being in possession of the weapon.

Officer Carpenter discovered these two individuals had lengthy criminal histories and were recently kicked out of the night club after an altercation with a patron. A records check on one of the individuals revealed he had four outstanding warrants for his arrest. This subject was ultimately arrested.

Officer Carpenter took the time to check the surroundings for possible hiding locations for a handgun – potentially preventing a violent crime from occurring. This handgun was more than likely going to be used in a retaliatory fashion against the patron expected to exit the night club. 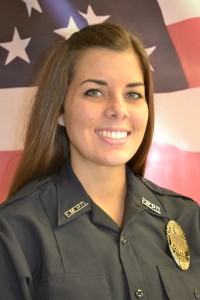 Officer Cassie McHale has been selected as the East Fort Myers Rotary Officer of the Month for December 2014. Officer McHale was honored for her superior work ethic and keen observation skills which resulted in the removal of a criminal from the streets of Fort Myers. There is no question that the actions of Officer McHale will prevent future burglaries within the City and increase the quality of life for its citizens.

On December 16, 2014 at approximately 2:37 am, officers responded to an audible front motion alarm at the Neighborhood Discount Grocery located at 2130 Ford Street. Upon arrival, Officers observed a large amount of debris on the floor and could see a small hole in the interior ceiling right above the front desk.

Video from the business captured a male dropping into the store wearing black gloves, a gray sweatshirt with “VANITY FAIR” written on the back with light colored khaki pants and tennis shoes. Once inside, the male targeted cash registers, ultimately removing a cash box and a substantial amount of loose change.

Officer McHale was in the course of investigating a separate burglary that had occurred earlier that evening where a suspect had smashed the front door of a business and was also captured on video. Officer McHale drove to the burglary location on Ford Street to view the surveillance video for similarities in the suspect’s clothing.

While driving to the station to complete her report, Officer McHale observed two individuals walking near Martin Luther King Jr. Boulevard and Palm Avenue. One of those individuals matched the description and was wearing the same clothing as the same individual captured on the video surveillance from the Ford Street burglary. Officer McHale was able to alert other units for support and detain both individuals for further investigation.

A records check on the suspect revealed he had four outstanding warrants for violation of probation. A search of the suspect’s person revealed items believed to be from the business along with black gloves that still had insulation fibers on them consistent with the ones located at the burglary scene. Officer McHale also noticed the suspect’s pants had roof tar on them.

The suspect was arrested and charged with burglary of an unoccupied structure, petit theft, and four violation of probation warrants. Paperwork was also submitted that will allow the Department of Corrections Probation Office the ability to formally violate the suspect’s probation with the new burglary charge. The suspect was also requested to be held under the Widman Act pending review by the sentencing authority. The suspect was recently released from prison on September 8, 2014 after serving just over five years for prior commercial burglary and theft offenses where cash registers were targeted.