On Tuesday, December 9, 2014 at 7:50 p.m. Fort Myers Police Department Bravo Shift Officers Curtis Cates and Gilberto Benitez conducted a traffic stop on a vehicle for running a stop sign. During the encounter officers learned the driver had a BB gun inside the vehicle. While this is not a violation of law FMPD would like to take this opportunity to remind citizens of the potential dangers these realistic looking weapons pose when possessed in public. 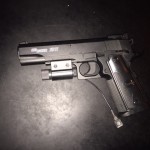 In this particular case officers found a replica of a black SIG Sauer model 1911 semi-automatic style handgun complete with a laser sight. Officers noted the replica not only looked realistic but was realistic in both size and weight. “These replica weapons not only pose a threat to law enforcement in some instances but a citizen who might lawfully carry a real firearm for protection,” said police spokesperson Lieutenant Victor Medico.

Things to consider if you are the owner of a replica gun:

FMPD is aware of recent incidents around the country where replica weapons were used either with or without criminal intent but had tragic outcomes. Our goal is to educate the public in order to avoid a local tragedy.
Lieutenant Victor Medico
Public Information Officer
Fort Myers Police Department
2210 Widman Way
Fort Myers, Florida 33901
(239) 321-7748
vmedico@fmpolice.com