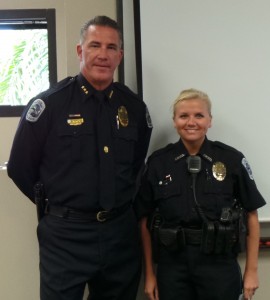 On Friday, November 14, 2014 the Fort Myers Police Department honored several employees at a monthly award ceremony. FMPD strives every day to not only protect and serve the residents of the City of Fort Myers, but to make it a better place to live. “It is our policy to recognize employees of exemplary performance of their duties” said Chief Doug Baker. “We appreciate their heroics and the hard work that these men and women put in each day.”

On September 16, 2014 at 7:00 a.m., a 2014 Ford Raptor truck was reported stolen from an address in the West district. Later the same day, Officer Gaide located the stolen truck abandoned off Solomon Boulevard while patrolling his assigned zone.

Officer Gaide and Officer Clausnitzer processed the truck for latent prints and submitted them for comparison. One of the prints lifted from the truck matched the prints of a known offender.

On October 6, 2014 the Detective Division issued a pick up for the suspect charging one count of Grand Theft Auto. On October 7, 2014 the suspect was located and arrested by the C.O.P.E. Unit and additionally charged with possession of marijuana and violation of probation. 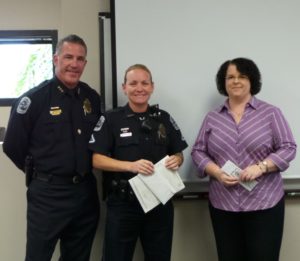 Traffic Homicide Investigator Officer Lesa Breneman was the Rib City Officer of the Month for October 2014. Officer Breneman is being honored for her continued commitment to the Fort Myers Police Department and the Violent Crimes Task Force. Officer Breneman is currently assigned to the Traffic Unit but has been called upon to assist the Violent Crimes Task Force on several occasions.

Officer Breneman utilized her training and experience as a D.U.I. investigator and a certified drug recognition expert on both arrests. In addition to these incidents, Officer Breneman has assisted the Violent Crimes Task Force by answering questions in relation to traffic statues, assisting with operations, and various traffic related issues.

Telecommunications Operator Susan Dobiesz was selected as the Civilian of the Month for October 2014. TCO1 Dobiesz was nominated for going above and beyond what is required of her normal duties while also working a very busy shift.

On October 4, 2014 a home invasion robbery took place on Karlov Street. TCO1 Dobiesz was working in communications and was the only call taker on duty during this time frame. This was a very busy Saturday night with multiple calls for service holding and many phone calls coming into the station, including 9-1-1 calls.

TCO1 Dobiesz took it upon herself to conduct several investigative inquiries which assisted in the robbery investigation. TCO1 Dobiesz’s extra efforts developed information that may not have been obtained under the aforementioned circumstances.