The Punta Gorda Police Department announced today that it is joining with hundreds of other law enforcement agencies across Florida in renewing a pledge to save lives by intensifying efforts to enforce seat belt laws — among all motorists and around the clock — during the Click It or Ticket mobilization which runs from May 12, 2014 to May 26, 2014.

According to the latest available data from the Florida Department of Highway Safety and Motor Vehicles, there were approximately 1,450 crashes in Charlotte County in 2012 with 18 fatalities. Research has shown that lap/shoulder belts, when used properly; reduce the risk of fatal injury to front-seat passenger car occupants by 45 percent and the risk of moderate to critical injury by 50 percent. For light-truck occupants, safety belts reduce the risk of fatal injury by 60 percent and moderate-to-critical injury by 65 percent.

Safety belts are 80-percent effective in reducing fatalities in light trucks (including sport utility vehicles) during rollover crashes. They also help prevent individuals from being totally ejected during a crash, thus reducing the risk of a fatal injury.

That is why the Punta Gorda Police Department is joining other state and local law enforcement agencies and highway safety groups in supporting an aggressive national 2014 Click It or Ticket seat belt enforcement campaign.

The Punta Gorda Police Department is asking for voluntary compliance and our enforcement initiative is meant to remind motorists of the law. The department would also like to make drivers aware that Florida has enacted a law allowing police officers to stop and ticket motorists solely for not wearing seat belts. Before this change which took effect on June 30th, 2009, officers could not stop drivers solely for not wearing a seatbelt. 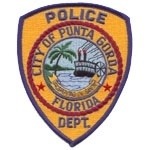