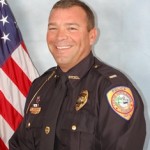 Punta Gorda Police Lieutenant Joe King has spent 15 years of a distinguished law enforcement career helping and recognizing others; particularly the youth of Charlotte County. But now, he’s in for a little recognition of his own.

The Punta Gorda Police Department has been notified by The Florida State Elks Association (FSEA), comprised of 150 statewide Lodges, that Lieutenant King will be awarded the 2013 Elks Enrique Camarena Award at a ceremony in Orlando, Florida next weekend. Lieutenant King was nominated for his vision in founding and subsequently coordinating the Punta Gorda Police Department’s JAMMERS Youth Basketball League in 2001. The Elks Enrique Camarena Award was established by the Benevolent and Protective Order of Elks to recognize and honor law enforcement officers who have made a significant contribution in the field of drug prevention and who personify Agent Camarena’s belief that one person can make a difference. Special Agent Enrique Camarena was a slain DEA Agent, murdered by the Mexican Drug Cartel while investigating drug trafficking into the United States. He was brutally tortured and killed in 1985.

Over the past 13 years, the very popular police JAMMERS league has grown immensely and currently serves close to 100 kids between the age of 10 and 13 annually. The league is funded completely by community donations and coached by Punta Gorda Police off-duty personnel. Lieutenant King envisioned the league to be a free opportunity for kids to stay busy during the summer, develop long-lasting relationships with Punta Gorda Police Officers, and learn the tenants of sportsmanship and teamwork. All participants must sign a good conduct agreement to play.

Chief Albert (Butch) Arenal stated “The very essence of leadership is vision, and Joe has a unique ability to turn vision into reality. He is a tremendous leader and his Punta Gorda Police Department family is very proud of this outstanding recognition.”

Lieutenant King began his career with the Punta Gorda Police Department in 1999. He has served as a Marine Officer, Detective, School Resource Officer, and he currently serves as the Administrative Services Supervisor for the agency. During his career, Lieutenant King has been awarded Officer of the Year in 2008, he received the agency’s prized Customer Service Award in 2010, and last year he was awarded the Annual Innovation Award for his vision and leadership in constructing a mobile Youth Interactive Center; funded completely by community donations. He is also a DARE Instructor for the Attorney General’s Office and an Assessor and Team Leader for the Commission for Florida Law Enforcement Accreditation, Inc.