Police Captain to be Awarded Honor by State Commission

Police Captain to be Awarded Honor by State Commission

The Punta Gorda Police Department is proud to announce that Police Captain Thomas P. Lewis has been selected to receive the prestigious 2013 Executive Director’s Award by the Commission for Florida Law Enforcement Accreditation, Inc. (CFA). The department received the notification from the Commission this week.

The Executive Director’s Award is presented to individuals who have made exceptional contributions that significantly advanced Florida Accreditation. Captain Lewis will be recognized for his service as a Team Leader on a number of law enforcement formal and mock accreditation assessments as well as technical site visits for Florida Police Departments and Sheriff’s Offices. Additionally, Captain Lewis served on a CFA committee to rewrite the Florida law enforcement and accreditation standards manual and is an active member of the organization’s Standards Review and Interpretation Committee which oversees and evaluates the effectiveness of standards statewide which agencies are required to meet to maintain accredited status. He was also recognized for his role as an instructor for CFA; providing chapter-specific training to Florida criminal justice agencies

Captain Lewis has conducted over 19 accreditation assessments throughout Florida since 2007. He is also frequently called upon by agencies throughout the State for his expertise and experience in the accreditation process. He currently serves as the Punta Gorda Police Department’s Operations Commander supervising Uniform Patrol, Investigations, Employee Development, and Specialty Units, among other various responsibilities. He has held that position for the past six years. He is also a graduate of the 243rd Session of the Federal Bureau of Investigation National Academy and he was recognized by the Southwest Florida Police Chiefs Association as the Outstanding Command Officer of the Year in 2012.

Chief Albert (Butch) Arenal is one of four Police Chiefs in the State of Florida who currently serves as a Commissioner for CFA. “Florida accreditation is the gold standard of law enforcement excellence and a process by which criminal justice agencies throughout Florida work cooperatively to enhance the quality of services we provide to our citizens,” stated Chief Arenal. “Tom is not only a large reason that Punta Gorda has seen such success in this difficult process, but he has assisted numerous agencies throughout Florida in achieving this monumental goal as well.”

Captain Lewis will be formally recognized and awarded by the Commission on June 25, 2014 during a special awards luncheon at the upcoming Florida Accreditation Conference in Bonita Springs.

“We are very proud of Tom’s success,” stated Chief Arenal. “We also wish to extend our sincere appreciation to the Executive Director for recognizing Tom’s commitment to the process.” CFA Executive Director Lori Mizell stated in her letter to the department, “People like Tom Lewis who live their lives with excellence, keep Florida Accreditation the preeminent law enforcement accreditation program in the United States.” 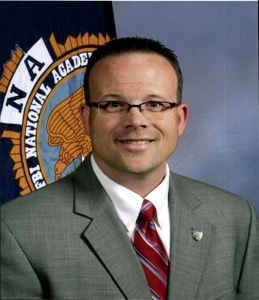