On Thursday May 15th, at 8:00 a.m., the Punta Gorda Police Department will honor Marshal John H. Bowman and Assistant Chief Richard L. Beecher, the departments’ only officers in the history of the department to die in the line of duty.

On January 29, 1903, Marshal Bowman was assassinated by a suspect who fired a shotgun through the front window of his residence. He was shot as an act of revenge for his tough stance against drinking and gambling. The suspect was originally sentenced to death but the sentence was reduced to life in prison. Marshal Bowman had been with the agency 7 years.

On October 10, 1978, Assistant Chief Beecher was killed while searching for an escaped murderer. During the search, Chief Beecher stepped on the running board of a truck to question the driver. As he stepped off, he was struck by a passing vehicle. Chief Beecher was transported to a local hospital where he died from his injuries.

The department will be placing 2 memorial benches in honor of Marshal Bowman and Chief Beecher in the City’s new Community Garden, located at the rear of the Public Safety Building. There will be a small ceremony and refreshments will be served immediately following the ceremony. The department would like to invite community members to come pay tribute along with department members on this special day.

The department is currently collecting donations in order to assist in purchasing memorial items for our fallen heroes. If you are interested in donating to the department’s Never Forgotten Memorial Fund, please contact Gloria Sepanik at (941)575-5563 or gsepanik@pgorda.us 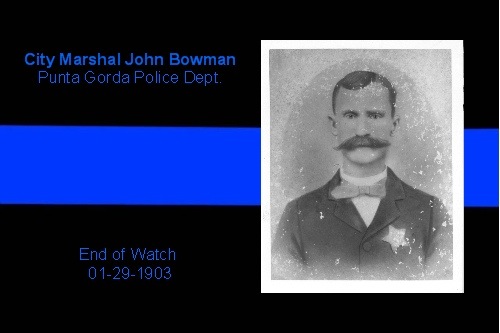 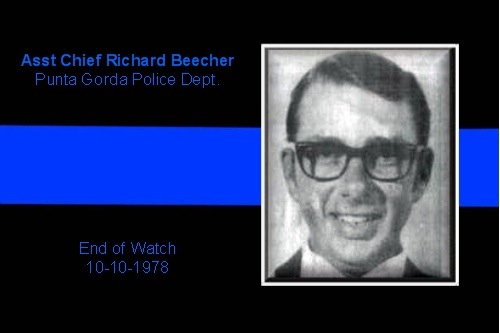