On Feb. 22, 2014, North Port Police Officer Keith Bush and his K-9 partner, Tomy, were flawless again as they flew through an obstacle course designed to replicate a real-life pursuit complete with walls to scale, buildings to search and criminals to apprehend. They finished the course, which took up most of the football field at Boynton Beach High School, in just over a minute and a half (beating the course record by 20 seconds) earning them top honors at the South Florida Police Competition.

Bush and K-9 Tomy, a Belgian Malinois, came in second place at the same competition last year.
Nearly 36 officers from across the state took part in this competition, which was designed to raise money for the Boynton Beach Police Department’s K-9 unit.

The North Port Police Department is proud of Keith and Tomy as well as our K-9 Unit, who are some of the best handlers and K-9’s in the State of Florida. Their continual perseverance towards greatness is remarkable.

The following is a link from another media source: 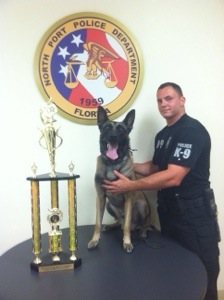