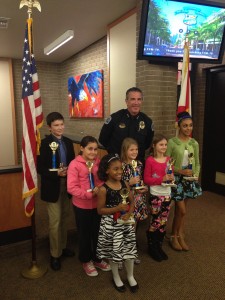 On Thursday, January 16, 2014 the Fort Myers Police Department’s “Do the Right Thing” program honored six area youth for their good deeds. Chief Doug Baker presented awards to the following students at a ceremony at the City of Fort Myers Council Chambers:

Khamare Cook is a 2nd grader at Orangewood Elementary who found a purse outside and turned it into the front office of her school for safekeeping. The purse was later reunited with its owner. It can be traumatizing to lose something as significant as a purse or wallet. We are proud Khamare went the extra mile to do the right thing.

Sukriti Maniktala is a 5th grader at Allen Park Elementary who was honored for finding $60.00 on the ground in front of the school. Sukriti could have easily kept the money but instead turned it in to school officials. A parent of the child who lost the money was able to claim it later. We are proud of the honesty Sukriti displayed during this incident.

Elizabeth Imbody a 4th grader, Mia Danzi a 4th grader, and Alaina Mixon a 3rd grader all from Edison Park Creative and Expressive Arts School were all honored for having their ponytails cutoff in front of their peers at school which were later sent to Locks of Love. Lock of Love will be using the hair to weave wigs for children with cancer. The thoughtfulness and compassion of these young ladies left a lasting expression on all their classmates. We are thankful to have such wonderful role models. 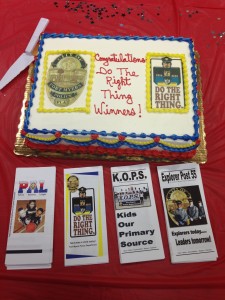 William Jesse Mudgett is a 5th grader at Edison Park Creative and Expressive Arts School who was riding his bicycle when he witnessed a 5-year old boy named Owen get sucked into a drainage pipe off McGregor Boulevard. Jesse was quick to react and had his younger brother remain at the drain while he ran to notify an adult. Owen traveled 280-yards through the drainage pipe and ended up in the Caloosahatchee River. Owen was rescued from the river only suffering minor scrapes and bruises. We are very proud of Jesse’s quick reactions that without a doubt helped save a young boy’s life.

The purpose of the “Do the Right Thing” program is to acknowledge, honor, and reinforce positive actions among local youth. It is also designed to enhance relationships between local law enforcement members and school-aged children. Congratulations to all the winners!