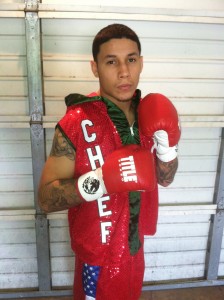 The Fort Myers Police Department is proud to announce two success stories from the Police Athletic League. Antonio Ojeda has been in the PAL Program for ten years and has built quite a resume along the way. Ojeda, a 19-year old out of Pivot Charter High School, won the Bronze Medal at the 2013 USA National PAL tournament in October 2013. Since then Ojeda signed on with One Punch Boxing Promotions and in his first pro fight he beat Orlando’s William Fouth in their 145-pound division bout in St. Petersburg last month.

Some of the accomplishments Ojeda garnered while in the PAL program include: 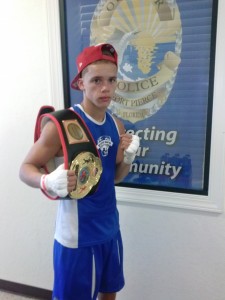 Our next standout is boxer Xavier Saitta who has been with the PAL program for the last four years. Saitta is a 16-year old fighting in the 138 lbs. class and current Junior Olympic Team member. Saitta is looking for a win to be on the National Team which will qualify him for a tryout with the US Olympic Team. Like Ojeda, Saitta has a laundry list of accolades such as:

Fort Myers Police Officer Johnny Seay is the director of the PAL program and has worked with both boxers over the years. “It is a credit to the strength of our program when we can highlight the many accomplishments of these two outstanding individuals.” Seay says, “I wish Ojeda the best of luck in his professional career and look forward to watching Saitta work toward those same goals.”

PAL is a not-for-profit organization serving 400+ youth annually by providing athletic, educational and social programs to area children. The program supplies equipment, uniforms and transportation to participants at little or no cost.  All coaches and volunteers are from the Fort Myers Police Department and the local community. PAL strives to provide role models, develop discipline, and instill self-esteem and foster positive moral values.  PAL is supported primarily through donations.  For more information contact Officer Johnny Seay at 239-707-3945 or jseay@fmpolice.com.