On Friday, October 11, 2013 the Fort Myers Police Department honored several employees at a monthly award ceremony. FMPD strives every day to not only protect and serve the residents of the City of Fort Myers, but to make it a better place to live. “It is our policy to recognize employees of exemplary performance of their duties” said Chief Doug Baker. “We appreciate their heroics and the hard work that these men and women put in each day.”

Detective Albert Antonini, Detective Jimmy Hernandez, Officer Giordani Almonte and Officer Yanny Morales were honored for their teamwork that solved a violent crime and took a criminal off our City streets. In September, officers responded to a call in reference to a male suffering from a gunshot wound. Officer Morales was first on scene and rendered aide to the victim. The victim was transported to the hospital and survived his injuries. Detectives Hernandez and Antonini arrived on scene and quickly located witnesses. With further investigation, they developed a possible suspect by nickname and obtained his phone number which ultimately led to his true identity. The detectives made contact with the victim who remained in the hospital and unable to speak due to his medical treatment. They presented the victim a photographic lineup and rolled his fingerprint so that he could select the suspect by touching the photo. The victim immediately identified the suspect. The detectives along with Officer Morales and Officer Almonte conducted surveillance to locate the suspect. They were able to take him into custody without incident and arrest him for aggravated battery.

Officer Gustavo Goncalves was honored for his professionalism and willingness to go above and beyond to solve a violent crime. Recently, FMPD responded to a sexual battery offense. Officer Goncalves was asked to respond to the scene to assist with translation as the victim’s primary language was Portuguese. The victim had been through a very callous and horrific act and identified a known acquaintance as the person responsible for the crime. Officer Goncalves provided translation assistance throughout the entire investigation and was very patient and professional with the victim who was extremely emotional. He spent a significant amount of time assisting the victim, detectives and the State Attorney’s Office until the suspect was arrested. Officer Goncalves often came to work on his time off to help. His dedication allowed detectives to quickly solve a case and bring a criminal to justice.

GRAMPA Cop Jackie Rivera was honored for her dedication to the youth in our community. GRAMPA Cops – Getting Retirees Actively Motivated in Policing Again are retired law enforcement officers that now work for FMPD in City elementary schools. GRAMPA Cop Rivera works at Orangewood Elementary. The children at the school love her. She works hard to educate the students about all aspects of safety including drug and bullying prevention. In addition she has been instrumental in planning an organizing the new Jr. KOPS program which is similar to commonly known junior police explorer programs. She was honored for her leadership and for the relationships she has developed with our City youth.

Thomas Jenkins was honored for his work with the Fort Myers Police Department. Jenkins is employed by the Department of Juvenile Justice. In 2007 he was assigned to work with the FMPD Juvenile Arrest and Monitoring Unit (JAM). He has worked diligently with our JAM unit that intensely monitors young people the courts have assigned to probation or home detention. Jenkins has participated in countless community service projects with FMPD. The projects help probationers complete community service hours. Jenkins has been an asset to FMPD and he was honored for his hard work and dedication. 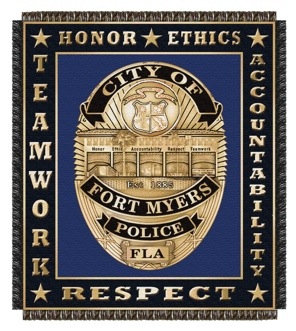