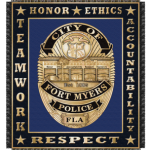 On Friday, August 9, 2013 the Fort Myers Police Department honored several employees at a monthly award ceremony. FMPD strives every day to not only protect and serve the residents of the City of Fort Myers, but to make it a better place to live. “It is our policy to recognize employees of exemplary performance of their duties” said Chief Doug Baker. “We appreciate their heroics and the hard work that these men and women put in each day.”

Officer Richard Carpenter was honored for his patrol skills the led to the arrest of a career criminal. Last month at 1:51 a.m. Officer Carpenter conducted a traffic stop at Lincoln Boulevard and Fountain Street for an individual riding a bicycle without the use of lights. The individual at the time decided he did not want to stop for Officer Carpenter’s lawful commands and fled. After a short foot pursuit and brief struggle, the suspect was apprehended. During the confrontation, the suspect was found to be in possession of a .25 caliber Raven semi-automatic handgun loaded with six rounds of ammunition to include one round in the chamber. The suspect was also in possession of 10 baggies of marijuana weighing 8.5 grams and crack-cocaine weighing .6 grams. The suspect, who is only 17 years old, has 35 prior arrests in Lee County for crimes to include: robbery, burglary, and aggravated assault. Officer Carpenter arrested the suspect for Carrying a Concealed Firearm, Possession of a Firearm by a Convicted Felon, Possession of Marijuana with Intent to Sell, Possession of Cocaine, and Resisting Arrest.

Detective Richard Meeks was honored for his hard work and expertise in the forensic and technical side of law enforcement. Detective Meeks is responsible for all electronic equipment and forensic investigations as well being a member of the SWAT Team. Due to his expertise, he is regularly assisting other divisions within the Fort Myers Police Department along with outside agencies such as Florida Department of Law Enforcement, Department of Homeland Security, Secret Service, and the Lee County Sheriff’s Office. Within the last month, Detective Meeks has assisted in 36 active investigations and has been the affiant on 12 forensic search warrants for homicides or crimes involving sexual offenses or exploitation of children.  Most recently, Detective Meeks was the co-lead investigator for a case initiated by FMPD. This case led to the recovery of two portable storage devices that contained child pornography.  Detective Meeks along with FDLE and Homeland Security worked tirelessly to develop probable cause to make an arrest.  Their hard work resulted in the suspect’s arrest.  The suspect will be charged federally and if convicted will spend a lengthy time in prison.

Officer Justin Trask and Officer Ryan LaRosa are the East Fort Myers Rotary Award recipients for the month. They were nominated for their outstanding performance they both displayed while apprehending a robbery suspect. Last month Officers Trask and LaRosa were patrolling the area of Marsh Avenue and Glenwood Avenue in the North District as part of Officer LaRosa’s field training. Officers Trask and LaRosa observed two people walking in the area wearing dark clothing that appeared to be underage and in violation of the City’s Youth Protection Ordinance.  Lawful commands to stop were given, but the suspects fled on foot away from the officers. After a short foot chase, one suspect was detained. During the arrest, the suspect was found to be in possession of a .22 caliber Trailside semi-automatic handgun.  The handgun was loaded with one round in the chamber.  The suspect has been arrested more than 25 times for multiple robberies and gun offenses and has a long history of violent behavior.  The officers arrested the suspect for Carrying a Concealed Firearm, Possession of a Firearm by a Convicted Felon, and Resisting Arrest. Due to Officer Trask and Officer LaRosa’s awareness and attention to crime trends, potential robbery activity was certainly interrupted for the evening and a menace to the City of Fort Myers was removed from the streets.