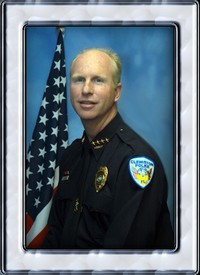 CLEWISTON—With two beautiful grandchildren, his oldest son working as a police officer in Lake City, Fla., and as an active member of First Baptist Church, Clewiston Police Chief Don Gutshall has a lot to be proud of. Most important for the citizens of Clewiston and Hendry County are the achievements Chief Gutshall has made for its police department — and those are many.

Born in Perry, Fla., Chief Gutshall began his career in law enforcement volunteering at the age of 18, and landed a paying gig as an officer at the Perry Police Department one year later. Chief Gutshall eventually traded his title of officer for the title of deputy and began working for the Taylor County Sheriff’s Office, climbing the ranks to Captain by age 34.

After reaching the rank of captain at the Taylor County Sheriff’s Office, an opportunity was presented to Chief Gutshall and he answered the call.

“I had an opportunity to be a police Chief in Georgia, so my family and I took off to Georgia to a small town called Quitman. I spent five years there and I refer to it as ‘doing time,’” joked Chief Gutshall, adding, “You’ll starve trying to make a living there. Quitman is a nice, friendly little town, but — poverty stricken. It was difficult there.”

Chief Gutshall was grateful for those years in Quitman, however, because it was there he learned the art of being chief and he was able to “brighten his badge” before returning to Florida.

“They were really patient with me,” said Chief Gutshall.

In the 11 years that Chief Gutshall has been with the Clewiston Police, the amount of crime committed in Clewiston has dropped dramatically. According to data reported by city-data.com, crime has fallen from 929.3 crimes per 100,000 population in 2002 to 268.8 crimes per 100,000 population in 2011 — a statistic best represented graphically. Except for a slight rise in crime in 2004 and 2008, the crime rate has fallen every year since Chief Gutshall joined the Clewiston Police, a statistic he is “quite proud of.”

Apart from his success in lowering the crime rate in Clewiston, Chief Gutshall has many other accomplishments under his police belt, many that he credits to the generosity of Clewiston’s City Commission.

“This commission has been so generous. They’ve been very generous to give me all the tools and help … that I needed, and it’s worked. They allowed me to bring in state retirement, they allowed me to up the pay scale a little bit, so we were able to compete with police departments and sheriff’s offices statewide. I brought in some very good help. It’s not every small, rural department that can produce a national police officer of the year, and we’ve been able to do that,” said Chief Gutshall, in reference to Officer Justin Spence, who was recognized as the Attorney General’s Officer of the Year in 2008.

“Probably the best thing I did for me, this department, and this city was hire Kristine Petersen as assistant chief,” said Chief Gutshall.

Peterson currently runs the criminal justice program at Clewiston High School (CHS) full-time. “She helped us through some rough stretches. There were just days there’s not enough of me to go around and she was able to stand in the gap.”

Along with the criminal justice program, the police explorers program at CHS is also dear to Chief Gutshall’s heart. Comparing it to the Boy Scouts of America and funded partially by the “cuss pitcher” in his office, Chief Gutshall lauded the program, which teaches teens everything they need to know about being an officer without actually going out and putting it to practice.

The Police Explorers program is important to Chief Gutshall in more than one way.

“The more time we can spend with kids before they leave high school, the less I’m going to have to deal with them five years from now,” he explained. “Being able to put a little paint on the walls of their lives has been exciting to me. Our explorer program is second to none.”

Though he tries to relegate his department’s accomplishments to others, Chief Gutshall cannot shy away from the limelight for too long. He received an award just this year for his work on the Florida Police Chief’s Association (FPCA). As a member of the assocation, Chief Gutshall helps to ensure that police executives receive the mandated training required by the state of Florida. According to Chief Gutshall, the FPCA brings in people from around the world to train Florida’s police executives; those executives then bring their newfound expertise back to their communities. Chief Gutshall, who has been part of the association for 10 years, said being recognized by his peers for his commitment was “special to him,” but it is the program itself that Chief Gutshall is most proud of.

“I just wonder how much effect we may have had on some police departments along the way,” he said.

Chief Gutshall attributes his achievements and successes as chief to good management practices.

“The secret to success,” he said, “is hiring people that are smarter than you are and taking their advice, listening to it. It takes every different personality under the sun to do something like this.”