The Punta Gorda Police Department honored its 2012 top performers during the agency’s annual employee recognition family picnic at the Punta Gorda Elks Lodge #2606 on Saturday. Employees, volunteers, family members, council members, and the city manager turned out to recognize Punta Gorda’s finest. The event was hosted again this year by the Elks, who purchased, cooked, and served the food for all attendees. The event also included a bounce house for the kids, water balloon tosses, and some good old-fashioned family time.

Award recipients for 2012 included the following:

Corporal Quegan and PFC Sills were recognized for the April 22, 2012 rescue of a male who had gone into cardiac arrest in the back of a U-Haul truck. The officers arrived on scene and immediately administered CPR, acquiring a pulse. Emergency open heart surgery at a local hospital ultimately saved the male’s life.

Officer of the Year 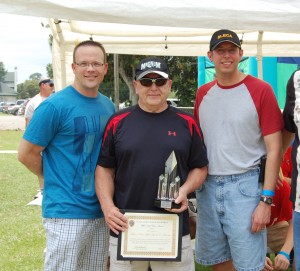 Civilian Employee of the Year 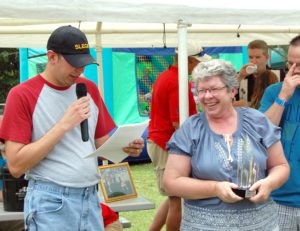 Telecommunicator Denis was honored by her peers for her outstanding performance as the Communication’s Section Lead Trainer, and her dedication in implementing and meeting all aspects of Florida’s recently-adopted 911 certification requirements.

The Roger W. Fenneman Volunteer of the Year Award

Volunteer Mary Robson was recognized for her extraordinary dedication as she volunteered 556 hours during 2012. Quiet and unassuming, Mary’s support of a number of administrative functions within the department were acknowledged, to include her personal implementation and maintenance of the agency’s customer quality assurance program. 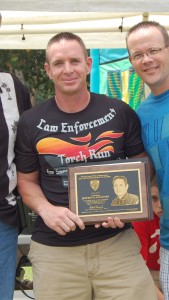 Exceptional Team Performance of the Year

Formed in late 2011, the agency’s Operational Proficiency Team (OPT) was recognized for a myriad of outstanding accomplishments over the course of 2012. Consisting of non-ranking members of all agency components, the team meets once each month directly with the Chief of Police. The purpose of the OPT is to remove communication filters that can occur within hierarchal organizations. The group problem solves, seeks new efficiencies, dispels rumors, checks agency morale, and brainstorms innovation.

Lieutenant Salsman was recognized for his quick thinking and fast action in foiling an attempted robbery in Charlotte Harbor in June of 2012. While on a traffic stop north of the Barron Collier Bridge, Lieutenant Salsman intercepted a female who was attempting to enter a taxi after taking money from a convenience store register after exhibiting what appeared to be a gun. Lieutenant Salsman was also recognized by his squad members for his inspiration, stability, and ability to challenge them to constantly improve.

Master Police Officer Heck was commended for her outstanding investigative skills in turning an April 2012 traffic stop for a minor speed infraction into a significant drug seizure. Recognizing the driver and keying on suspicious behavior, Officer Heck ultimately uncovered a shoebox full of drugs and seized thousands of dollars in wadded cash.

Family Member of the Year Award

Yvonne Kirdy, wife of Investigations Lieutenant Jim Kirdy, was honored as the agency’s Family Member of the Year for her tireless support of the department. Yvonne not only supports the agency during special events, but she serves as a Jammers basketball coach and provides agency personnel with advice and assistance in financial matters.

Dan Fulton, Vice President of C1 Bank, was on hand to accept the Punta Gorda Police Department’s Community Alliance Award. C1 Bank was recognized for their strong support during the agency’s hosting of the United States Police Canine Association National Field Trials in 2012, as well as their support of various other important community initiatives sponsored by the Police Department.

“Uniting our families to celebrate our great successes of 2012 is always a special day,” stated Police Chief Butch Arenal. “But the officers, employees, and volunteers of the Punta Gorda Police Department are all award winners every day of the year in my book.”