On June 30, 1993, Punta Gorda Police Officers responded to the 3700 block of Whippoorwill Blvd. for a report of a missing 64 year-old woman.  The missing woman, Frances Hendrickson was last seen by a neighbor driving her 1987 light blue colored Buick station wagon.

Approximately two years ago, the case was regained momentum using sonar to search City canals for the missing woman’s vehicle. Detectives teamed up with the Florida Department of Law Enforcement, Sarasota County Sheriff’s Office, and the Lee County Sheriff’s Office in the effort.  Yesterday, using a new advanced sonar technology, a light blue colored station wagon was discovered in a canal behind the intersection of Whippoorwill Blvd. and Eider Street, just blocks from the missing woman’s home.  That sonar picture is the one to the right.  This area was previously searched by air and water numerous times.

Around 8:00 a.m. this morning, members of the Punta Gorda Police Department Dive Team, Lee County Sheriff’s Office Dive Team, Florida Department of Law Enforcement Forensic Unit, as well as a representative from the Mote Marine Laboratory, began the operation of recovering the vehicle from the canal. 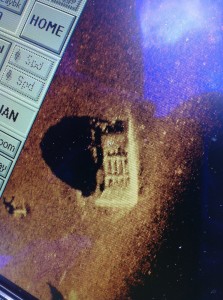 At around 8:15 a.m., using an underwater robotics camera supplied by the Lee County Sheriff’s Office, officers were able to document the underwater scene.  The vehicle was then slowly and carefully moved closer to the seawall.  It was raised onto a vacant lot at approximately 10:36 a.m., where detectives and forensic analysts discovered clothing items and skeletal human remains.

Based on the evidence found at the scene, investigators are confident that this is the vehicle and remains of Frances Hendrickson. Charlotte County Medical Examiner, Dr. Imami responded to the scene and his office will be working closely with officials. 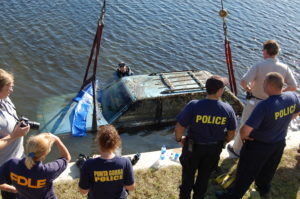 The skeletal remains and other items will be examined by the Florida Department of Law Enforcement and the Charlotte County Medical Examiner.  A dental comparison and DNA test are anticipated to confirm the identity of the remains as soon as possible.  Chief Albert A. “Butch” Arenal stated, ““Twenty years after the fact, we are relieved to have finally provided closure in this case. I couldn’t be more proud of our tenacious investigators and their refusal to give up on this missing person case.” Chief Arenal also stated “We are very grateful to Lee County Sheriff Mike Scott and his department for their assistance and their commitment to seeing this case through to the end with us.”