On December 20th, members of the Southwest Florida Police Chiefs Association (SWFPCA) gathered for the organization’s annual holiday luncheon at the Gulf Coast Medical Center on Daniels Road in Fort Myers. The annual luncheon is the traditional time in which the association honors those dedicated law enforcement professionals who serve the citizens of Southwest Florida so diligently.

Awards were voted by the membership from a number of nominations submitted from law enforcement agencies across Southwest Florida for distinction above and beyond the call of duty.  Recipients of this prestigious recognition were as follows: 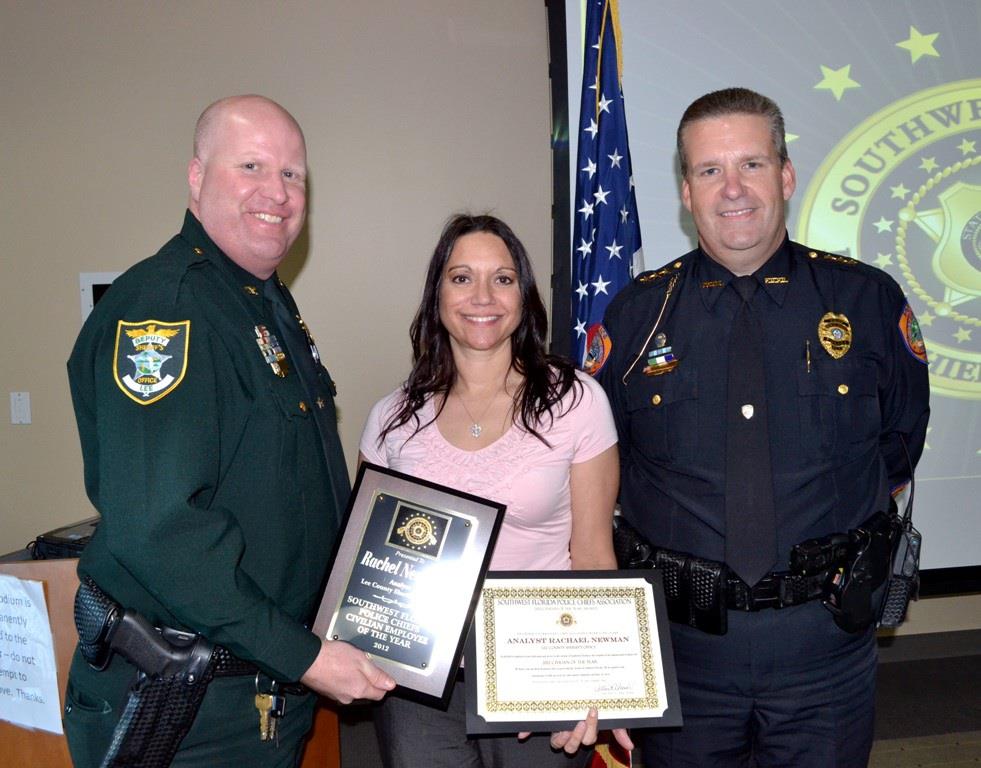 As a member of the Lee County Sheriff’s Office Intelligence Unit, Analyst Newman was recognized as the “go to” analyst in Southwest Florida for criminal intelligence and information. Due to her diligence and commitment, she was honored for recently merging information from multiple cases to identify a significant criminal enterprise. 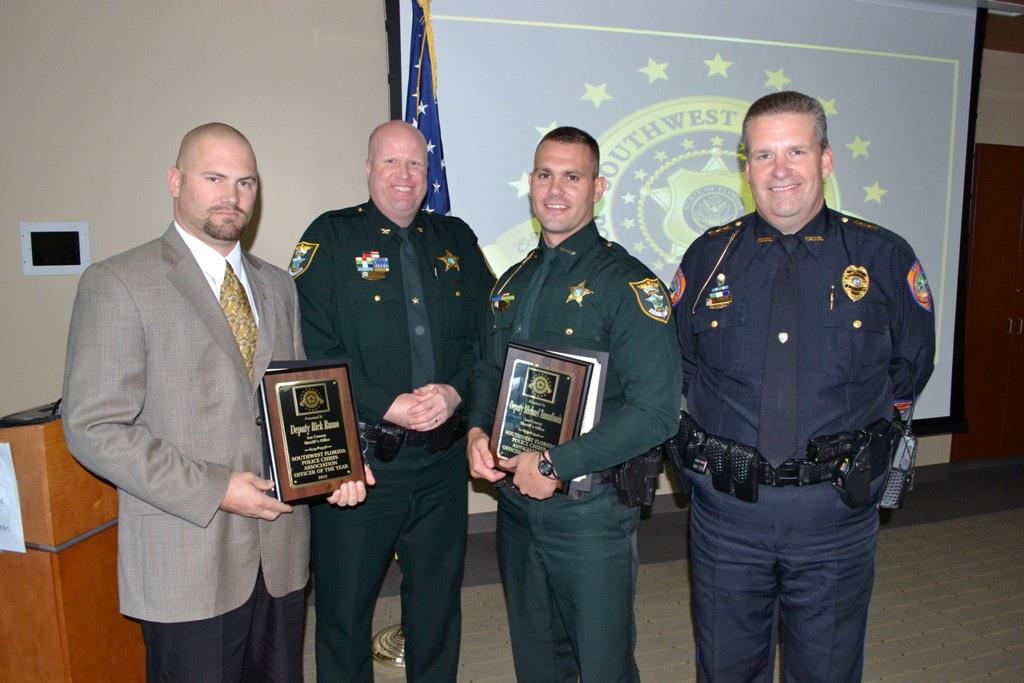 Detectives Russo and Tamulionis were honored for their role in the August 7, 2012 apprehension of Billy Ray Retherford, a subject wanted in reference to several Lee County homicides. After a 7 day manhunt, intelligence developed by Detective Russo led both of the Detectives to a residence in which Retherford was ultimately found. In an effort to protect innocent citizens at the scene, Detectives Russo and Tamulionis courageously entered the residence where they confronted Retherford and attempted to take him into custody. After Retherford attempted to draw a firearm, Detectives opened fire killing Retherford, thus ending his reign of terror.  Commenting on both his Civilian and Sworn award winners, Lee County Sheriff Mike Scott stated:

“Our dedicated law enforcement professionals in Southwest Florida are all heroes; however, circumstances dictate that some demonstrate their bravery, training, and commitment to excellence in situations that stand out from the rest. I am very proud of the winners and honored to stand with the SWFPCA in recognizing them.”

The SWFPCA Outstanding Law Enforcement Chief Executive of the Year must demonstrate outstanding leadership, vision, and innovation in Southwest Florida law enforcement consistent with the goals and objectives of our organization. Naples Police Chief Tom Weschler was honored for his extensive professional career, his principle-centered leadership, and his visionary pursuit of efficiency and excellence in the provision of public safety services to the citizens of Naples.

2012 Outstanding Command Officer of the Year 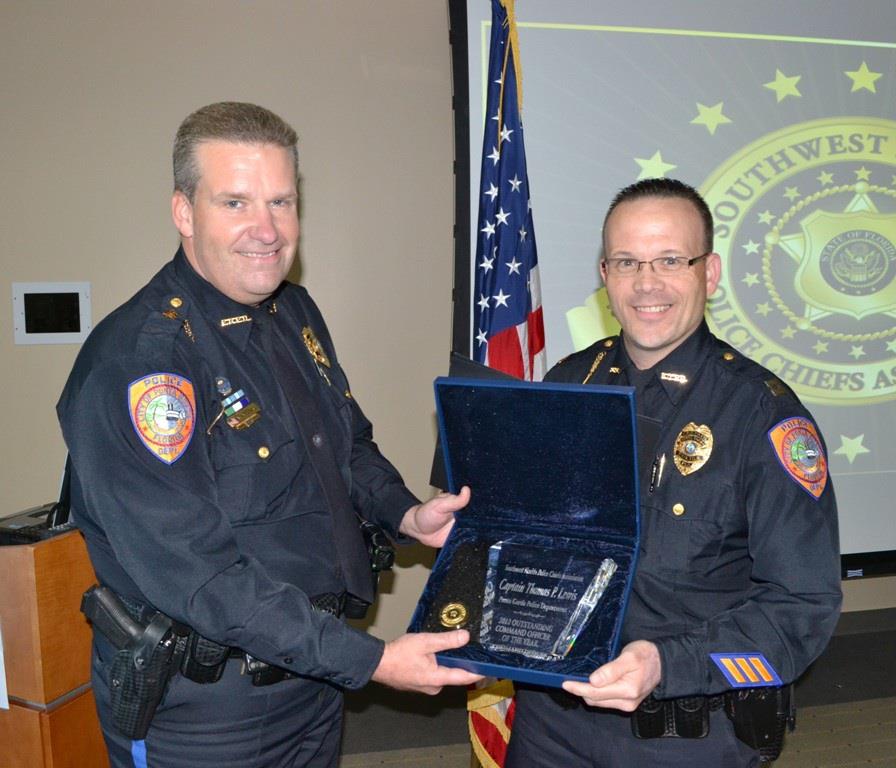 The SWFPCA Outstanding Command Officer of the Year must demonstrate outstanding leadership, vision, and innovation in Southwest Florida law enforcement consistent with the goals and objectives of our organization. Punta Gorda Police Captain Tom Lewis was honored for his outstanding leadership qualities as Operations Commander, his assembly and mentoring of a cohesive, elite leadership team, and his dedication and commitment in helping to facilitate an organizational cultural evolution toward a more agile, customer service oriented philosophy and an employee centric management approach. 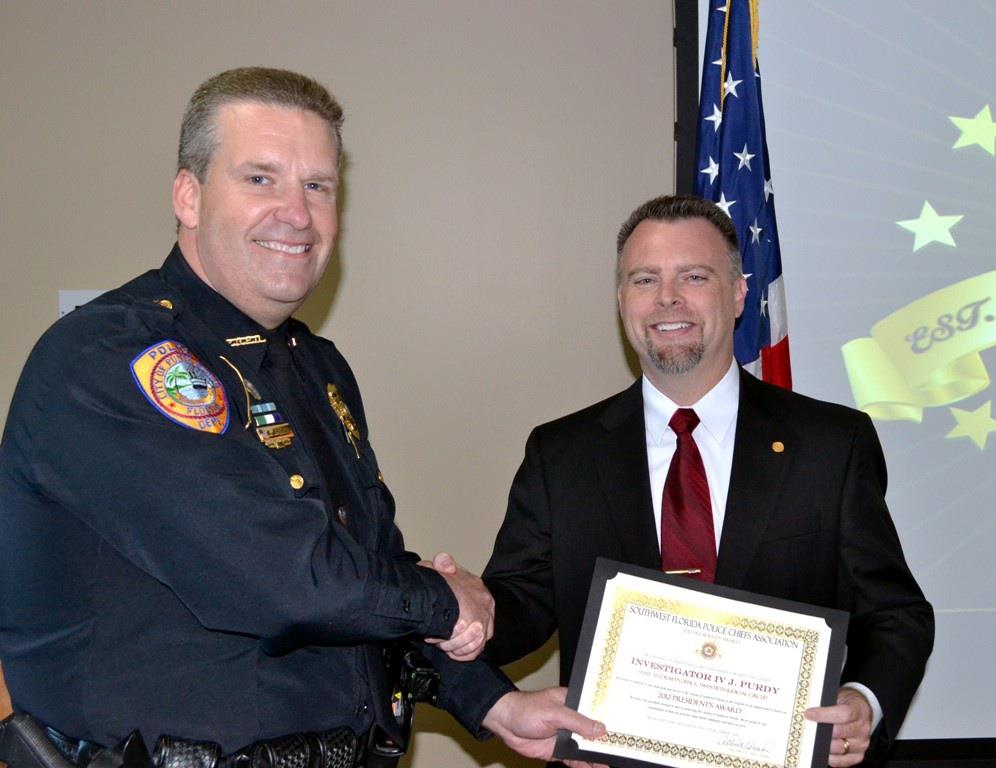 The SWFPCA President’s Award recognizes association members who have demonstrated individual achievement, innovation, creativity, and smart work that enhances the effectiveness of the SWFPCA and furthers our stated goals. SWFPCA President Albert (Butch) Arenal presented this award to Investigator J Purdy who revolutionized interactive communications for the SWFPCA by establishing a new organization website, automated critical components of the site, enhanced functionality and efficiency with a number of innovative options, and recently launched a companion Facebook page.

Certificate of Special Recognition and Appreciation 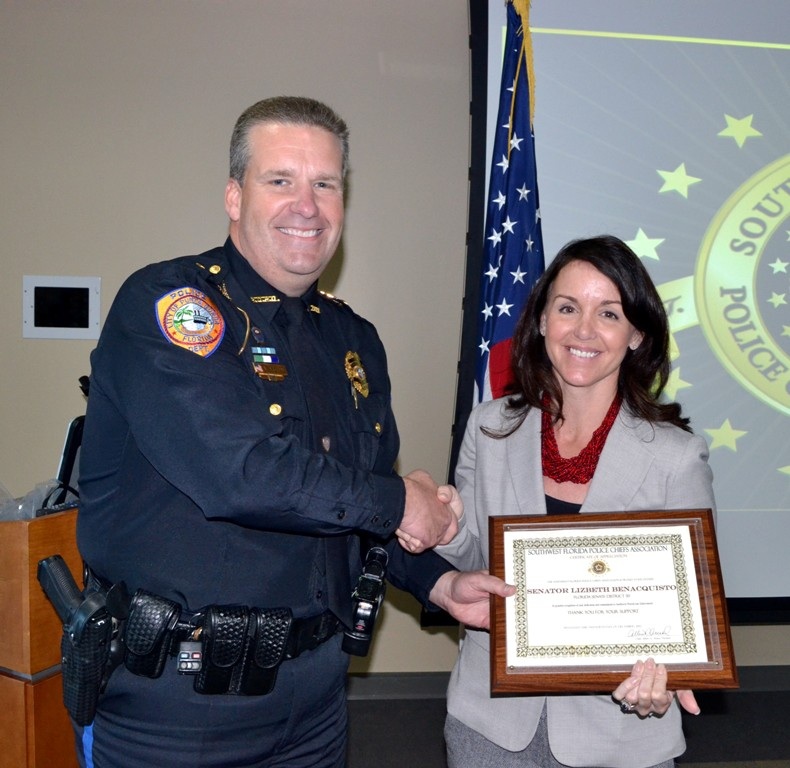 On behalf of the SWFPCA, President Arenal also presented special guest, Florida Senator Lizbeth Benacquisto, with a Certificate of Appreciation for her outstanding support of Southwest Florida Law Enforcement over the past several years. Senator Benacquisto, who was gracious enough to attend the awards luncheon, was unaware that she would be receiving the honor. In presenting the award, Chief Arenal stated:

“Senator Benacquisto has been an ardent supporter of Southwest Florida law enforcement during her years of service. Her common sense approach and her understanding of the role of government as it relates to public safety, makes her a tremendous asset for the citizens of our region.”