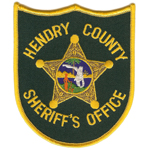 Becoming accredited by the commission for Florida Law Enforcement Accreditation is considered a significant accomplishment and this status is held in high esteem by the criminal justice community.

The Hendry County Sheriff’s Office entered into an agreement with CFA to allow on-site inspectors to review Sheriff’s Office policies and practices and observe agency components, equipment and programs to include ride-alongs and interviews with agency personnel.

Undergoing the voluntary state accreditation process provides an agency with a “quality assurance review” and encourages intense self-scrutiny resulting in more efficient and effective daily operations. “We are striving to create and maintain a culture of professionalism and accountability within the agency as a way of doing business,” said Sheriff Steve Whidden.