Lowest Crime Rate in Past Decade

Mid-year crime figures for the City of Punta Gorda have been calculated and forwarded to the Florida Department of Law Enforcement for validation.  Those numbers reveal one common, consistent theme – crime in the City of Punta Gorda is at its lowest point in at least a decade. Florida uniform crime reporting (UCR)  is completed both annually and semi-annually, and serves as a measure for specific Part One (violent) and Part Two (non-violent) crimes. 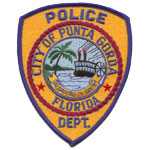 A summary of January 2012 – June 2012 crime data in the City of Punta Gorda reveals the following:

City of Punta Gorda total index crimes dropped by 13.98% in the first half of 2012, falling from 186 index crimes to 160.  This is the lowest index crime rate in the City ofPunta Gorda in at least the past decade;

Chief Albert (Butch) Arenal credits the continuing reduction in crime to a community-oriented approach.  “Although we are extremely pleased with these trends, we at the Police Department have always been cautious not to take too much credit for dropping crime rates.  Combating crime is a city-wide effort, and all City employees and officials take part in creating an atmosphere that deters crime.  Most importantly – a close partnership with our citizens is the key.”