Last Thursday, June 21, 2012, members of theSouthwest Florida Police Chiefs Association(SWFPCA) honored retiring Florida Fish and Wildlife Conservation (FWC) CaptainDenis Grealishfor almost 40 years of dedicated service to the citizens ofSouthwest Florida.  Captain Grealish is the longest tenured member of the SWFPCA, having been a member since the organization’s incorporation in 1985.

Local law enforcement executives, along with several dignitaries, were on hand as Captain Grealish was honored for his exceptional service to Southwest Floridawith the presentation of the organization’s symbol of career excellence, a golden eagle.  SWFPCA President, Punta Gorda Police Chief Albert (Butch) Arenal presented the award, which was accompanied by a standing ovation of the membership.  “Captain Grealish’s distinguished career provides a road map for any law enforcement professional who wishes to establish a legacy for success and service to our citizens,” Chief Arenal stated.

Lee County Sheriff Mike Scottcommented, “Simply stated…Denis Grealish is a consummate professional who has been and will continue to be a role model for Law Enforcement.”

The sentiment was echoed by Lieutenant Colonel Adams, who traveled from Tallahasseeto congratulate Captain Grealish on behalf of FWC.  “Captain Grealish’s passion for Florida’s natural resources is evident to anyone who has worked with him.  His efforts protecting manatees and promoting boating safety are particularly admirable.  We appreciate the example he has set for his fellow law enforcement officers, and we wish him well in his retirement.” 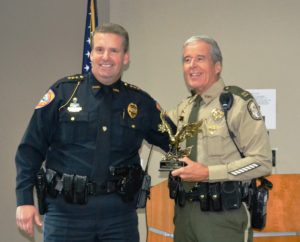 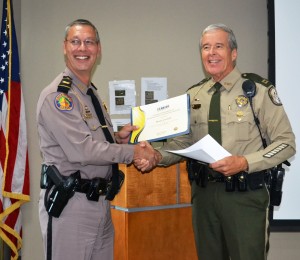 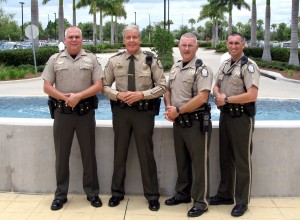