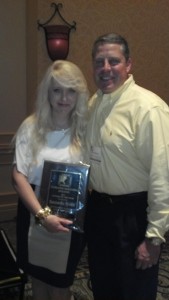 For the sixth consecutive year, Southwest Florida Crime Stoppers earned the Productivity Award for assisting in the arrests of more fugitives, the closure of more unsolved cases and the recovery of more drugs and property than any program of its size in the Southeastern US.  In 2011, anonymous Crime Stoppers tips led to 778 arrests, the closure of 1,795 cases, the seizure of nearly $330,000 in drugs and property, with awards payouts of just over $182,000.  The program also received an award for its long-length public service announcement entitled “Not in My Backyard: When Human Trafficking Hits Home,” documenting the growing concern of human slavery occurring right here in our own community.  Finally, Board member Samantha Syoen, Communications Director for the State Attorney’s Office, received the prestigious “Citizen of the Year” award for her dedication to Crime Stoppers, and her extensive efforts in coordinating numerous fund raising events throughout the year.  Southwest Florida Crime Stoppers is a non-profit organization, serving the counties of Lee, Charlotte, Collier, Hendry and Glades Counties, which operates exclusively from donations and a share of fines imposed upon criminals.

“Earning these awards is a testament to the fact that Crime Stoppers works.  However, our program couldn’t be successful without the callers who have had the bravery, and good citizenship, to pick up the phone and provide anonymous tips on unsolved crimes and wanted fugitives.  A tremendous amount of credit also goes to the law enforcement members who quickly follow up on those tips, and make the arrests,” said Trish Routte, Coordinator of Southwest Florida Crime Stoppers.

*Note:  A photograph of Samantha Syoen, the Citizen of the Year recipient, and Paul Atkinson, President of Southwest Florida Crime Stoppers, is attached to this release.