The Punta Gorda Police Department honored its top performers of 2011 during a picnic for spouses and family members, which was held Saturday, April 14th, at the Punta Gorda Elks Lodge.   The picnic included lunch, events for children, and awards. 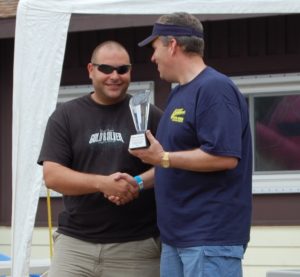 Punta Gorda Police Officer Justin Davoult was named Officer of the Year during an awards picnic held Saturday, April 14th, at the Punta Gorda Elks Lodge.  The award is given to the officer “based upon outstanding performance and dedication in the performance of his/her duties.”  Corporal Chris Owensby nominated Officer Davoult in wrote in the letter: “Officer Davoult has rapidly gained the respect of his peers after showing selfless work ethic and teamwork … Officer Davoult consistently exceeds standards and clearly excels in the area of investigations.”  Officer Davoult was responsible for several high-profile arrests during 2011.

Telecommunicator Gloria Sepanik received the Civilian of the Year award, which is “based upon outstanding performance and dedication in the performance of his/her duties.”  Communications Supervisor Nancy Morris nominated Sepanik and wrote: “Gloria’s involvement in daily, ongoing work-related tasks as well as participation in a vast amount of extracurricular events, most of which she is a ring leader, is just a part of why she was nominated … Gloria’s motivation, initiative, and contagious enthusiasm is second only to her selfless giving.” 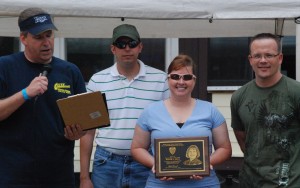 Officer Bonnie Sills earned the Fourth Annual Customer Service Award, which is awarded to a member “who has best demonstrated a consistent commitment to excellence through extraordinary and Communications Supervisor Nancy Morris received the First Annual Innovation of the Year award.  Telecommunicator Gloria Sepanik wrote in her nomination letter: “Because of her hard work and diligence, the Punta Gorda Police Department has joined the ranks of the few PSAPs (Public Safety Answering Point) recognized by the Florida Department of Health as an approved 911 Public Safety training facility … 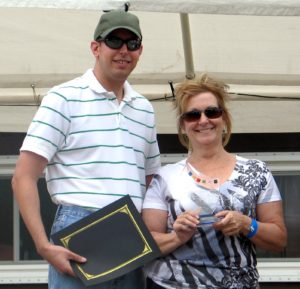 The process to become state certified is a difficult, tedious process which takes months of research and documentation.  This is no easy feat.  She is a dedicated employee, who obviously cares about the future of this department and the citizens of this community.”superior customer service over the course of the year.”  Master Police Officer Trevor Triebe nominated Officer Sills and wrote in his nomination: “Her positive outlook and vision are clearly beneficial, and have been instrumental to the continued success of the Punta Gorda brand.  She plays like a champion every day.” 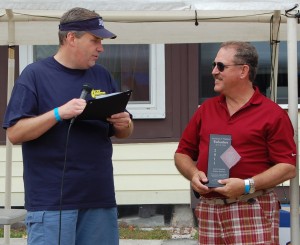 Senior Chaplain Bill Klossner received the Roger W. Fenneman Volunteer of the Year award.  Chief Arenal nominated Chaplain Klossner and wrote: “Bill has woven the role of Chaplain into the very fabric of the Punta Gorda Police Department.  He shares our vision for this organization, and has dedicated hundreds of hours to making the department a shining star in our community.  I feel there is no other volunteer more deserving for this prestigious award.”

Other honors awarded Saturday include: 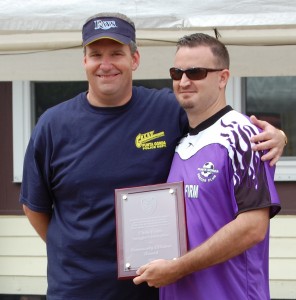 Punta Gorda Police Family Member of the Year: Fred Sepanik, for his involvement with Jammers, Relay for Life, Special Olympics and other events.  “Although quiet by nature, he is truly a behind the scenes contributor to many community events in which the Department participates throughout the year … He is a very big supporter of the Department and the Community,” wrote Telecommunicator Gloria Sepanik in her nomination letter.

Special Recognition Award: Volunteer Mary Robson, for her continued contribution to Records, Administration, and the Pension Board.  “Mary has a positive reputation with other volunteers and agency staff.  She truly meets and exceeds all aspects of customer service.  Mary has the fourth highest in worked hours this past year.  There is no doubt she has a can-do attitude and represents the best of what volunteers do,” wrote Bob Toth, Deputy Coordinator Records, in his nomination letter.

Special Recognition Award:  Master Police Officer Trevor Triebe, for his quick action and fortitude when he apprehended a robbery suspect and recovered the thousands of dollar worth of property.  “Although this crime did not occur in the city ofPunta Gorda, Officer Triebe was able to leave the outstanding brand of the Punta Gorda Police Department with the victim,” wrote Officer Bonnie Sills in the nomination letter.

Special Recognition Award: Officer Dylan Renz, for his numerous DUI arrests in 2011.  Officer Renz made 90 arrests in 2011, and of those 45 were DUI arrests.  “Officer Renz is a shining light for our agency and a promise of only great things to come,” wrote Lieutenant Melissa Reynolds in her nomination letter.

Special Recognition Award: Officer Rebecca Grim, for her consistent commitment to excellence.  Officer Grim “is a dedicated professional who cares about the citizens she serves … Officer Grim is a dedicated team player, a valued member of the team, one who does not shy away from extra work, and is consistently offering her assistance in any way she can,” wrote Lieutenant David Lipker in his nomination.

Special Recognition Award: Corporal Harvey Ayers, for his involvement in the arrests of four suspects.  They were allegedly on their way to committing a robbery inPort Charlotte.  “Corporal Ayers prevented the incident from being carried out and protected those who were not hurt as a result of his thoroughness and persistence,” wrote Lieutenant David Lipker in his nomination. 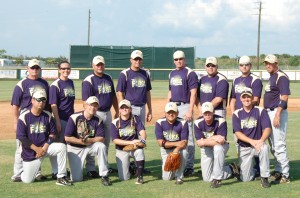