The students of the year include the following: Cape Coral Police Department honored Ashley Gosling (Ida Baker High School) for her efforts to save a toddler who was found in a swimming pool.  The Lee County Sheriff’s Office honored Debra Chaney (Sonshine Christian Academy) for saving a neighbor from a fire, being active in her youth ministry and for volunteering as a Sheriff’s Explorer. The Collier County Sheriff’s Office honored Marco Amen (Barron Collier High School) for helping a younger student that was being bullied. The Fort Myers Police Department also honored Andrew Taylor (Tanglewood Elementary) for his courage in helping a younger student that was being bullied.

The “Student of the Year” is selected for making a difference in their community and for being a role model to their peers.  The four winners receive a basket full of prizes and a check for $1,000 to be used for educational purposes. The event included an awards ceremony, K-9 and SWAT demonstrations, bomb squad, helicopter and games. 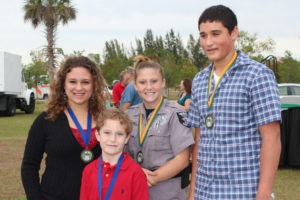 For the past 15 years, local law enforcement agencies have recognized our community’s youth for the positive things they do at monthly award ceremonies. Whether helping a fellow student, saving a life, earning money for a charity, reporting drugs or weapons in their schools or sending well wishes to soldiers the goal is to put a spotlight on them as role models.