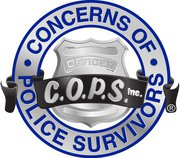 April 25, 2012-A marathon and a half each day – that’s how much Lee County Sgt. David Drum plans to run to make it to Tallahassee by May 4.

More than 100 friends, colleagues and family members sent him off Wednesday morning at the Lee County Sheriff’s Office headquarters in Fort Myers.

“Those stories should have a much happier ending,” Drum said Wednesday. “I just want to help.”

Sgt. Drum plans to make it to Port Charlotte by the end of the day Wednesday.

The Walk for the Fallen is a fundraiser that will benefit the organization named C.O.P.S. or Concerns Of Police Survivors (www.nationalcops.org). C.O.P.S. was created in 1984 and is a non-profit organization that supports the families of fallen law enforcement officers. This support is displayed in number of ways, from counseling to scholarships and from kids summer programs to courtroom survivor support. C.O.P.S. strives to care for the families of those who fell while protecting ours.

The walk/run has two simple goals; first is to raise funds for C.O.P.S. but just as important is the goal of raising awareness in the general public who most likely don’t realize the sheer numbers of officers who are killed in the line of duty and how far reaching the effects become. The event itself will take me from the Lee County Sheriff’s Office headquarters building in Fort Myers to the Florida State Capitol in Tallahassee. I will begin on April 25th and over the following 10 days I will run and walk 390 Miles; that is equal to a marathon and a half every day. I will maintain this pace so that I can arrive at the State Capital in time to attend the Florida Law Enforcement Officer’s Memorial service. With 14 fallen officers, Florida lost more officers than any other state in 2011. The names of these officers who paid the ultimate sacrifice will be added to the Law Enforcement Memorial on the Capital grounds. While this event is taking place in Florida the funds are going to COPS National Office as the need for their services don’t end at the state line.

I’m not naïve enough to think that this will be a small task as I believe that run to Tallahassee will push me beyond where I think my limits are both physically and emotionally. Whatever pain and discomfort I feel in my training is nothing compared to the pain that these families feel when they get a late night call telling them that their husband, wife, father, mother, son or daughter will not be coming home.

Please consider supporting my efforts and the fantastic work by the people at C.O.P.S. by passing on, to your families and friends, this information and invite them to view this site. Also please go to www.facebook.com/walkforthefallen, make sure to click the “like” tab. By clicking on the “like” button we are able to send a message of our combined support to potential sponsors. By sharing the link on your own Facebook wall accomplishes the goal of getting the word out not only of the event but of the magnitude of the loss we as a nation suffer each year.