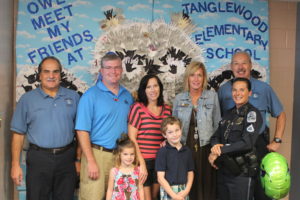 On Wednesday, March 21, 2012 at 7:55 a.m. the Fort Myers Police Department announced the City’s Do the Right Thing (DTRT) Student of the Year. FMPD selected Andrew Taylor, a second grader at Tanglewood Elementary. Andrew was nominated from a group of 46 DTRT winners from the school year. His courage in helping a younger student, who was being bullied, pushed him to the top for this recognition.

Back in November, Andrew witnessed several older students bullying a kindergartner in a school bathroom. The young student was near tears from the laughing and taunting by the older boys. Andrew knew it was wrong and with a loud forceful voice he intervened and told the older boys to stop. The boys were so shocked that someone stood-up to them they left the bathroom. Andrew showed great strength and courage to do the right thing.

For the past 15 years, local law enforcement agencies have recognized our community’s youth for the positive things they do at monthly award ceremonies. Whether helping a fellow student, saving a life, earning money for a charity, reporting drugs or weapons in their schools or sending well wishes to soldiers the goal is to put a spotlight on them as role models. Andrew will once again be honored as the law enforcement agencies come together at the Regional Do the Right Thing Picnic in April. Congratulations to Andrew Taylor for being selected FMPD’s Student of the Year!