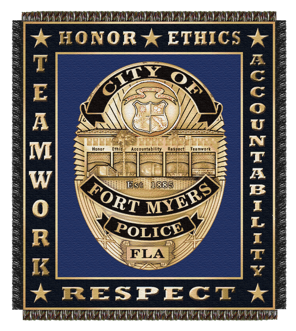 On Friday, February 10, 2012 the Fort Myers Police Department honored several officers at a monthly award ceremony. FMPD strives every day to not only protect and serve the residents of the City of Fort Myers, but to make it a better place to live. “It is our policy to recognize employees of exemplary performance of their duties” said Chief Baker. “We appreciate their heroics and the hard work that these men and women put in each day.”

Sergeant Michelle Rand, Officer Joseph Vidal, Officer Brandon Birch and Officer Jordan Laupert were honored for their teamwork and the arrests of two suspects were loitering and prowling. Recently they responded to an apartment complex in reference to two suspicious people wearing hooded jackets and checking car doors in the parking lot. Upon police arrival the suspects fled on foot towards a water treatment plant. The officers establish a perimeter and apprehended both suspects without incident. Their quick response and action may have saved citizens from becoming victims of a crime, such as burglary or auto theft. The incident is a perfect example of the community and police working together.

Officer Oscar Basora and Officer Jason Sandt were honored for their outstanding and distinguished service with the Department’s Honor Guard Unit. Being a member of the Honor Guard Unit is not a simple task. The officer must be a pillar of strength in times of sorrow and sacrifice. They hold back that tear when comforting the families of fellow Fallen Officers. They are extremely professional, ceremonial, and dedicated; and stand strong when having the honor and privilege of guarding a Fallen Officer’s Casket. They make sacrifices each time they are called into action. Officer Basora and Officer Sandt display extraordinary traits: Leadership, Courage, Honor, and Strength. Their professionalism and dedication is appreciated.