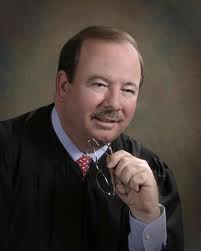 Yesterday, members of the Southwest Florida Police Chiefs Association(SWFPCA) gave local Circuit Judge G. Keith Carya standing ovation as he was presented with a special certificate of recognition.  Judge Cary was recognized for his admirable and distinguished service as 2011 Chair of the Commission for Florida Law Enforcement Accredition (CFA), Inc., the entity responsible for granting accredited status to state criminal justice agencies.  In presenting the award to Judge Cary, SWFPCA President Chief Albert Arenal stated, “Judge Cary’s distinguished service over the past six years as a Commissioner for CFA, combined with his outstanding service over 2011 as Chair, are a direct reflection of his commitment to our region, as well as state law enforcement as a whole.  We are lucky to have a man of Judge Cary’s reputation and character in our community.”

“It has been my distinct pleasure and honor to have known Judge Cary for over 40 years.  In that time I can say without reservation that his passion for the law and his desire to serve the residents of Lee County is exemplary.  Judge Cary’s tenure as Chairperson of the state’s Law Enforcement Accreditation Commission is but one small example of the respect he has within the criminal justice community.  All of the residents within the five county 20th Judicial Circuit are fortunate to be served by such a fine gentleman and fair jurist.” – Chief Jay Murphy, Cape Coral Police Department

“The Honorable Keith Cary has served Florida’s law enforcement community well as Chair of the State Accreditation Commission.  Judge Cary’s oversight has furthered professionalism and compliance with industry standards, and the citizen’s of Florida owe him a debt of thanks.” – Sheriff Mike Scott, Lee County Sheriff’s Office