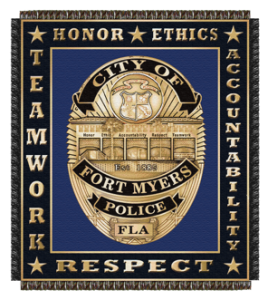 On Friday, December 9, 2011 the Fort Myers Police Department honored several officers at a monthly award ceremony. FMPD strives every day to not only protect and serve the residents of the City of Fort Myers, but to make it a better place to live. “It is our policy to recognize employees of exemplary performance of their duties” said Chief Baker. “We appreciate their heroics and the hard work that these men and women put in each day.”

Sergeant Peter Tarman was honored for his thirteen years of outstanding and distinguished service with the FMPD Honor Guard Unit. Being a member of the Honor Guard Unit is not a simple task nor is it made for every officer. A person in this Unit needs to be a pillar of strength in times of sorrow and sacrifice. They need to be able to hold back that tear when comforting the families of fellow Fallen Officers. They need to be extremely professional, ceremonial, and dedicated. They need to stand strong when having the honor and privilege of guarding a Fallen Warrior’s Casket. They need to make sacrifices each time they are called into action. In 1998, Sergeant Tarman was a member of the newly-constructed Honor Guard Unit with the department. Over the past thirteen years, he has risen to the rank of Operational Sergeant, handling all activities and events within the Unit. In addition to these duties, Sergeant Tarman always goes the extra caring mile with each close friend and family member of our Fallen Comrades. Sergeant Tarman’s professionalism and performance is an example for others to follow.

Officer Charles Ciulla was honored for conducting a recent traffic stop that resulted in a significant arrest. Officer Ciulla pulled over a vehicle for speeding. During his conversation with driver, Officer Ciulla noticed that the front seat passenger appeared extremely nervous. Upon witnessing the actions and fearing they may be trying to hide something Officer Ciulla requested the assistance of a K-9 officer with his investigation. The K-9 alerted to the presence of illegal narcotics in the vehicle. Officers conducted a search of the vehicle and located a loaded Taurus automatic .45 caliber handgun under the front passenger seat. The Firearm contained a magazine containing eight (8) .45 caliber rounds of ammunition. The chamber of the firearm was also loaded with a .45 caliber round. A total of nine (9) rounds of ammunition were recovered. Marijuana was also located in the vehicle.

Officer Stephen Smith was honored for his proactive patrolling which lead to the arrest of a burglary suspect. Officer Smith was patrolling the area of the City in reference to aluminum thefts that had been recently occurring in the area. In the early morning hours, Officer Smith heard loud noises coming from an undeveloped complex. Officer Smith drove his patrol vehicle to the entrance just inside of a fence line, and observed a male standing over a pile of fencing that appeared to be cut from the barrier. Officer Smith attempted to approach the suspect but the suspect fled on foot. After a short foot pursuit, the male was taken into custody without incident and charged accordingly.

Senior Staff Assistant Denise Egolf, Senior Staff Assistant was honored for her outstanding assistance she provided during the 2011 Fort Myers Cops & Joggers 5 K Race. Over the past several years, the race has become a great success due Ms. Egolf’s actions, attention to detail, and outstanding work ethics. With her assistance the fourth annual Fort Myers Cops & Joggers 5 K Race brought in 316 runners and raised more than five thousand dollars in support of the Fort Myers Police Department’s Memorial Fund and the Brotherhood Ride.