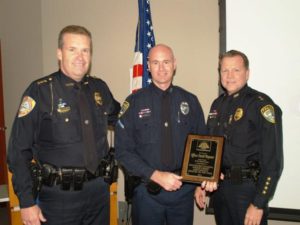 These awards were voted by the membership from a number of nominations submitted from law enforcement agencies across Southwest Florida for distinction above and beyond the call of duty.

Officer Wagoner was honored for his bravery and courage after being shot three times during a traffic stop in April of this year.

On Saturday April 16, 2011 at 12:41 a.m., Cape Coral Police Officer David Wagoner conducted a traffic stop on a Cadillac sedan in the 100 block of Santa Barbara Blvd North. Officer Wagoner approached the driver’s window and made contact with the driver, a 17-year-old female. He asked for and received her driver’s license. Officer Wagoner asked her male passenger if he had any ID. The male passenger, Yousel Lopez Rivera, stated that he did not have ID. Officer Wagoner asked the female driver to get her registration and proof of insurance as he walked behind the Cadillac and approached the passenger window to obtain Rivera’s information.

As Officer Wagoner was calmly relaying the information over the radio and returning fire, Rivera jumped on top of the female driver and began driving away. Rivera continued driving the Cadillac while sitting on top of the original driver who was seat belted in. Rivera crashed the car into a home at 1138 Santa Barbara Blvd North.

Cape Coral Police Officers, Canine units, and the Aviation Unit searched the area for the suspect. Officers from the Fort Myers Police Department as well as Deputies from the Lee County Sheriff’s Office responded to assist in the search. Canine Units tracked Rivera’s trail locating him hiding appropriately in a garbage can next to a home. Rivera was then taken into custody.

Officer David Wagoner distinguished himself through his actions of courage and bravery during the most intense situations a police officer can face and had the wherewithal to remain calm, return fire, and relay important suspect information over his police radio even after he was shot multiple times. Officer Wagoner kept relaying suspect information to responding officers on-scene up to and including while he was transported to Lee Memorial Hospital.

“Officer Wagoner is a credit to himself and family, the great men and women of the Cape Coral Police Department, and our Southwest Florida Law Enforcement family. He represents everything that we have come to expect from the outstanding police professionals in Southwest Florida,” said Punta Gorda Police Chief and organization President Albert A. Arenal before presenting the award to Officer Wagoner.

In response to Wagoner receiving the award, Cape Coral Police Chief Jay Murphy stated, “Officer Wagoner is one of our finest police officers. I can think of no one more deserving of this distinguished honor from the Southwest Florida Police Chief’s Association. David Wagoner embodies what the SWFPCA is all about by bringing to life their number one purpose and goal – to uphold the honor of law enforcement.”