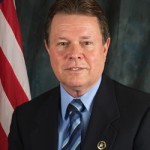 On August 18, 2011, members of the Southwest Florida Police Chiefs Association welcomed U.S. Marshal William (Bill) Berger to Southwest Florida. Marshal Berger was appointed February 9, 2011, as the 16th United States Marshal to oversee the Middle District of Florida since 1838. The Middle District encompasses offices located in Fort Myers, Tampa, Ocala, Orlando and Jacksonville. Marshal Berger was formally the Police Chief in the City of Palm Bay and the City of North Miami Beach. He has also served as the President of the International Association of Chiefs of Police (IACP) in 2001 and 2002 as well as President of the Florida Police Chiefs Association from 1996-1997. Berger has been serving in law enforcement since 1974.