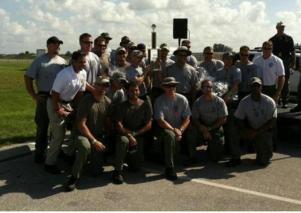 The Competition was divided into three events, or stages:
• Stage One- consisted of a 400 yard run followed by a grueling obstacle course another 400 yard run and then a difficult shooting course made up of sniper rifles, shotgun and pistol shooting.

Cape Coral Police Team #1 took first place in all three stages. Cape’s Team #2 finished second in stage two. In the end, Cape Team #1 had a lead of 6 minutes over every other team and was a runaway winner for the second year in a row.

“The Cape Coral teams put all their heart into this competition, spending a considerable amount of their own time training for the events. These guys not only trained for the competition but continued to train on their regular SWAT training regimen,” said Sergeant Carlos Mena, a team leader for CCPD SWAT.