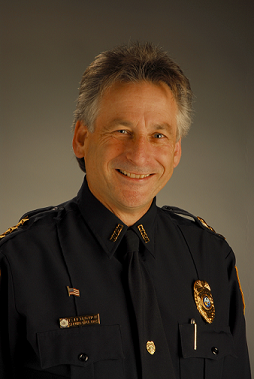 As reported in the Cape Coral Daily Breeze

Petrovich was presented with an Eagle Statue recognizing 26 years of distinguished service to the citizens of Cape Coral and the law enforcement community as a whole.

Among his many accomplishments, Petrovich is a graduate of the 199th Session of the Federal Bureau of Investigation National Academy as well as the Police Executive Research Forum’s Senior Management Institute for Police. As chief, he led the Cape Coral Police Department through the process of Law Enforcement Accreditation with Flagship Honors through the Commission on Accreditation for Law Enforcement Agencies Inc., he created the COPSTAR program which has been instrumental in maintaining a low crime rate, and he moved the agency into a new state-of-the-art facility in 2009. Petrovich is also a past president of the SWFPCA.

Members of the SWFPCA had the following to say about Chief Petrovich:

“It has been a great honor to have worked with Chief Petrovich for the past 20-plus years,” said Fort Myers Police Chief Doug Baker, who is also the SWFPCA vice president. “Rob’s leadership and community-minded approach to law enforcement has not only enhanced the quality of life for Cape Coral, but has set the bar for other agencies to follow in Southwest Florida and throughout the State of Florida.”

“We have enjoyed a healthy working and personal relationship over many years and at different ranks within our respective agencies,” said Lee County Sheriff Mike Scott. “During these years, we both rose to the top of our ranks and continued working side by side in a mutually beneficial and cooperative fashion. It has been a distinct pleasure serving alongside Rob Petrovich and I wish him all the best as he enters the next chapter of his life.”