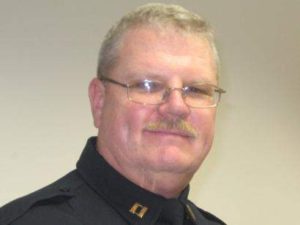 VENICE – The city has selected a new police chief, whittling down more than 300 applicants before settling on one of its own — Venice Police Capt. Tom McNulty — to lead the force.

On Tuesday, Mayor John Holic soon made it clear he strongly believed Woodley had made the right choice to the nearly 100 people filling the seats at City Hall.

“All three candidates were gentlemen, all were knowledgeable, all were extremely qualified,” Holic said. “I would be happy with any of the three. The fact of the matter is only one is going to be chief and I, for one, support the city manager 100 percent and vote for her selection as chief.”

The council then voted 6-1 in favor of naming McNulty the new chief over the lone objection of Councilman Emilio Carlesimo. McNulty will officially be installed as police chief in the first City Council meeting in May provided compensation negotiations are completed successfully by then.

Councilman Kit McKeon’s motion to hire McNulty touched off a 45-minute debate over the relative merits of the three finalists — out of more than 300 applicants — to make Woodley’s short list, which included 23-year Venice Police Department veteran McNulty, Lewis and and Clearwater Police Maj. Mark Teunis.

The job was open because former Venice Police Chief Julie Williams was forced to resign after she was found to have created a hostile work environment, which left the city in need of a top cop.

Carlesimo said McNulty should have shown leadership by stepping forward when Williams was creating a hostile work environment.

“He kept quiet when he should have spoken up about what she was doing,” Carlesimo said. “He stated it was out of loyalty to the chain of command. I think, as an officer and captain, he also had a loyalty to the police force and the city as a whole, not just to one police chief.”

Carlesimo said Woodley had chosen the least qualified police chief candidate, with McNulty possessing just four years of management experience instead of the eight years requested of all applicants. He also emphasized another McNulty résumé discrepancy with Venice job requirements.

“There’s a line on the application form that says master’s degree preferred,” Carlesimo said. “He doesn’t have one.”

Others came to McNulty’s defense before the mayor decided the issue.

Councilman Jim Bennet described McNulty as “a gentleman who has worked his way up through the force in what cannot be regarded as comfortable circumstance,” adding, “I regard that as meritorious.”