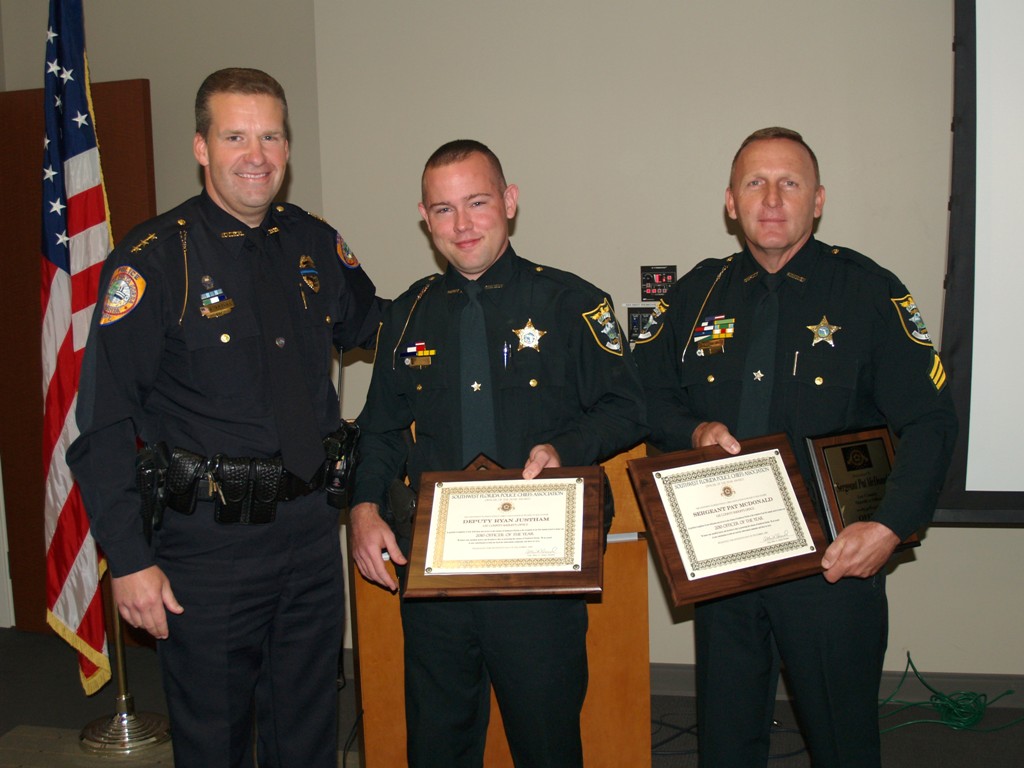 On April 24th, 2010, Lee County Deputies responded to an address in Lehigh Acres, Florida regarding a report of a suicide. Upon arrival, Deputies located one deceased person on the driveway and were told it was a suicide, but were then told that a second “suicide victim” ran into the woods. Using solid tactics, Sergeant Patrick McDonald requested additional units knowing he needed to clear the house first.

With a tactical approach, Sergeant McDonald and Deputy Ryan Justham entered the residence. Deputy Justham located a highly concealed suspect in a bedroom. Deputy Justham ordered the subject out of the bedroom. The suspect refused to surrender and immediately opened fire on Justham and his backup, with a rifle. A Deputy with Justham had to take cover in a bathroom that shared a wall with the room the suspect firing on the officers was in.

Deputy Justham then took a tactical position in the kitchen and returned fire. Both McDonald and Justham maneuvered tactically by switching positions of cover while the other returned fire, suppressing the suspect’s gunfire. Sergeant McDonald and Deputy Justham were able to stop the threat, the suspect was neutralized, and his weapon was secured by Sergeant McDonald.

Due to Deputy Justham and Sergeant McDonald’s courage under threat of deadly force, they prevented the suspect from leaving his place of cover and advancing on the deputy who was trapped in the bathroom. These members used proper deadly force and tactics to end this threat.

During this situation, there were numerous firefighters and medical personnel outside the residence treating a victim later determined to be a murdered victim and not a suicide. This surrealistic scene escalated from a suicide call to a deadly threat against officers within a short period. Sergeant McDonald and Deputy Justham acted decisively by not running into the wooded area seeking an alleged suicide victim, instead, clearing the residence. Their actions preserved the lives of citizens, fire department personnel, and deputies on scene.

For this, the Southwest Florida Police Chiefs Association is proud to award Sergeant Patrick McDonald and Deputy Ryan Justham our prestigious Officer of the Year Award.